Bay City is a city in Bay County in the U.S. state of Michigan. It is located near the base of the Saginaw Bay on Lake Huron. As of the 2010 census, the city's population was 34,932, and it is the principal city of the Bay City Metropolitan Statistical Area, which is included in the Saginaw-Midland-Bay City Combined Statistical Area. The city, along with nearby Midland and Saginaw, form the Greater Tri-Cities region of Central Michigan, which has more recently been called the Great Lakes Bay Region.

The city is geographically divided by the Saginaw River, and travel between the east and west sides of the city is made possible by four modern bascule-type drawbridges: Liberty Bridge, Veterans Memorial Bridge, Independence Bridge, and Lafayette Avenue Bridge, which allow large ships to travel easily down the river. The city is served by MBS International Airport, located in nearby Freeland, and James Clements Municipal Airport. Third Street Bridge, with Sage Mill in background, 1918. The bridge collapsed in 1976 after being hit by a freighter.[5]

Leon Tromblé is regarded as the first settler within the limits of Bay County, in an area which would become Bay City. In 1831, he built a log cabin on the east bank of the Saginaw river. Bay City was first established in 1837 and was incorporated as a city in 1865. In 1834 John B. Trudell built a log-cabin near the present corner of Seventeenth and Broadway. Trudell later purchased land that extended from his residence north along the river to what later became the location for the Industrial Brownhoist, making him the first permanent resident of what has become Bay County.[6] Bay City became the largest community in the county and the location of the county seat of government. Most of the county's agencies and associations are located here. The city shares common borders with Essexville and the townships of Bangor, Frankenlust, Hampton, Merritt, Monitor, and Portsmouth.

Bay City was originally known as "Lower Saginaw," and fell within the boundaries of Saginaw County[] On June 4, 1846, the Hapton, or Hampton, Post Office opened to service Lower Saginaw.[7] The community was placed in Bay County, when the county was organized in 1857. It was at this time that the name was changed to Bay City.[] The Post Office changed its name to Bay City on March 22, 1858.[7]

While Saginaw had the first white settlement in this area in 1819, larger ships had difficulty navigating the shallower water near the Saginaw settlement. Due to this fact, many of the early pioneers moved to Lower Saginaw as it became clear its deeper waters made it a better location for the growth of industry which relied on shipping. By 1860, Lower Saginaw had become a bustling community of about 2,000 people with several mills and many small businesses in operation. In 1865, the village of Bay City was incorporated as a city. Rapid economic growth took place during this time period, with lumbering, milling, and shipbuilding creating many jobs. The early industrialists in the area used the Saginaw River as a convenient means to float lumber to the mills and factories and as a consequence amass large fortunes. Many of the mansions built during this era are registered as historical landmarks by the state and federal government.

In 1873, Charles C. Fitzhugh, Jr., a Bay City pioneer, and his wife, Jane, purchased land and built a home on property bounded by Washington, Saginaw, Ninth and Tenth Streets, which later became the location for City Hall. Fitzhugh dealt on a large scale in wild lands and farms, being an agent for over 25,000 acres (100 km2) of land in Bay County. During this time, Washington Avenue was primarily developed with residential homes. Businesses were concentrated along Water Street near the Saginaw River. As time went on, businesses started to expand along Washington Avenue. In 1891, the Fitzhughs sold the land to the City of Bay City for $8,500 "to be used for the erection of a City Hall and offices and for no other purposes whatever."

Until 1905, the City of Bay City was limited to the east bank of the Saginaw River. when West Bay City was annexed.[8]

During the latter half of the 19th century, Bay City was the home of several now-closed industries including many sawmills and shipbuilders. The Defoe Shipbuilding Company, which ceased operations December 31, 1975 built destroyer escorts, guided missile destroyers, and patrol craft for the United States Navy and the Royal Australian Navy. To maintain this strong Naval heritage, the Saginaw Valley Naval Ship Museum worked through the Naval Sea Systems Command to bring the USS Edson (DD-946) to Bay City as a museum ship. It was finally delivered to its temporary home in Essexville, Michigan on August 7, 2012.[9] Another important part of the city's industrial history is Industrial Brownhoist, which was well known for its construction of large industrial cranes.

There was a majority German section of Bay City called Salzburg. However, most people in Bay City were not German and the German-descended minority became the focus of extreme nativism and xenophobia. Pastors introduced English-language sermons for the first time in that part of town in response; however, it did not catch on and sermons in Salzburg remained mostly German. The Salzburghers demanded that the rest of Bay City recognize them as Americans first and German-American second; nevertheless, hostility towards them continued. [10] The governor of Michigan at the time, Albert Sleeper, sought support from the German-American community; however, anti-German sentiment in Michigan was so widespread that this proved to be a costly mistake. Even before the declaration of war against Germany, anti-German and pro-British sentiment were dominant in Michigan, as a result, hundreds of young men from Michigan had gone across the border to Canada to join the Canadian Armed Forces so as to be a part of the war effort.[11]

Bay City's unusual Third Street Bridge was damaged by a freighter on June 17, 1976. The following morning, when the swing span was operated, one half crashed into the Saginaw River blocking all riverine traffic. A river crossing was never reinstated at that location. [13]

On December 10, 1977, a deadly fire claimed the lives of 10 at the Wenonah Hotel (Wenonah Park Apartments) in downtown Bay City. [14] The hotel had been built on the site of the Fraser House, which had also succumbed to a fiery end. [15]The Wenonah Hotel was located at the corner of Center Ave and Water Street, the current site of the Delta College Planetarium. Built in 1907, the four-storey Wenonah Hotel had been converted into apartments at the time of the fire. [16] Strong winds and cold weather hampered the efforts of the fire department. There was some controversy over the cause of the fire (arson, electrical, or grease fire) and it remains the deadliest fire in Bay County history.

In September 1990, the tankship MV Jupiter was unloading gasoline at the Total Petroleum Terminal. A passing cargo ship, MV Buffalo, moving at excessive speed, created a wake that caused Jupiter to break free of its berth. A fire and explosion ensued, and one man drowned. There was considerable legal action taken, ultimately resulting in an adjudication that was subsequently appealed by the owners of Buffalo. The findings of the Court of Appeals upheld the original decision, which assigned 50% of the responsibility to Buffalo (for her excessive speed), 25% to the dock operator (for rotten wood pilings) and 25% to Jupiter (for improper procedures in unloading her cargo).[18][19]

In January 2009, Bay City's wholly owned municipal power company, Bay City Electric Light and Power, installed a "limiter" device to restrict the receipt of power to the home of Marvin Schur, a 93-year-old customer who had failed to pay an outstanding bill in excess of $1,000. The Bay City Electric Light and Power policy was to install the limiter, and to notify the customer by trying to collect the amount due. City employees failed to knock on the door, and it was later found that Schur had a check already made out and had failed to mail it. Schur died from hypothermia in his home a few days later.[20] The day following his death, Bay City Electric Light and Power removed the limiters from all households. It was later learned that Schur had willed his estate, estimated by his family to be in excess of $500,000, to Bay Regional Medical Center.[21]

On October 12, 2010 the historic 113-year-old City Hall sustained significant damage as the result of an attic fire which caused the sprinkler system to run for nearly two hours. Most of the damage to the building was water damage from the sprinkler system and water used to fight the fire. The fire started in the midst of a $1.6 million roofing project. After an investigation, it was determined that a worker was using a grinder to cut off bolts in the area where the fire started, and sparks from the work started the blaze. Fire crews were on the scene for nearly five hours fighting the hard-to-access fire.[22][23]

According to the United States Census Bureau, the city has a total area of 11.21 square miles (29.03 km2), of which 10.17 square miles (26.34 km2) is land and 1.04 square miles (2.69 km2) is water.[25] Despite declining population, Bay City remains (by a narrow margin over Port Huron) as the largest U.S. city by population on or near Lake Huron, much smaller than the largest cities on the other four Great Lakes: (Chicago, Toronto, Cleveland, and Thunder Bay).

This climatic region is typified by large seasonal temperature differences, with warm to hot (and often humid) summers and cold (sometimes severely cold) winters. According to the Köppen Climate Classification system, Bay City has a humid continental climate, abbreviated "Dfb" on climate maps.[26]

The City of Bay City is located in the following districts:

According to Bay City's 2011 Comprehensive Annual Financial Report,[28] the top employers in the city are:

Michigan Sugar is also based in Bay City.

Bay City is well known in Mid-Michigan for its numerous festivals and celebrations which take place during the summer months. Among them are the River Roar, St. Stan's Polish Festival, the Bay City Fireworks Festival, and the River of Time living history reenactment. Many of these events take place along one or more banks of the Saginaw River, often in Wenonah Park on the east bank or the larger Veterans Memorial Park on the west bank.

The Bay County Historical Museum, located on Washington Avenue, is the designated repository for the records of the Patrol Craft Sailors Association and also contains numerous displays on local and regional history. Over the past several years, the museum has expanded significantly. It is housed in the former armory building on Washington Avenue, adjacent to the historic City Hall.

The official Bay City flag is blue with the city logo on it. It has been changed from the original design.[29]

The Hell's Half Mile Film and Music Festival is held annually in September. The festival features a mix of independent films with live indie music.[30]

The Bay City Rollers, a Scottish band, was named after this city after the band randomly threw a dart at a map.

The singer Madonna, who was born in Bay City, referred to her birthplace as "a little, smelly town in Northern Michigan" for which she has great affection on national television.[31][32] The story of Bay City's refusal to have a commemoration sign about the singer was described in a book "Madonnaland" (2016) by Alina Simone.[33]

On The Tonight Show with Jimmy Fallon, one segment, "Hashtags: #MyHomeTownIsWeird", Jimmy Fallon mentions a tweet about Bay City's Friendship Ring water monument being called the toilet seat by residents of the town.[34][35]

Bay City is the home to the Tri-City Ice Hawks of the United States Premier Hockey League.

The city's main newspaper is The Bay City Times. 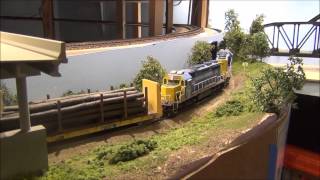 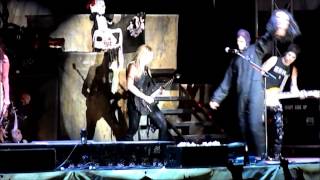 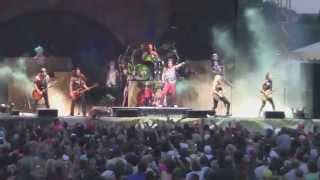 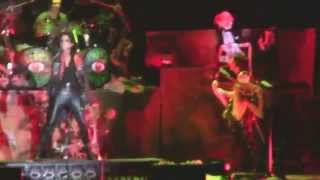 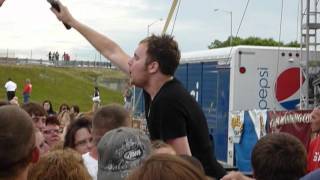 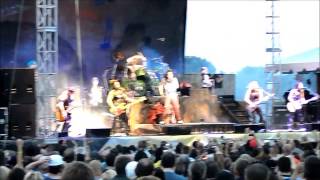 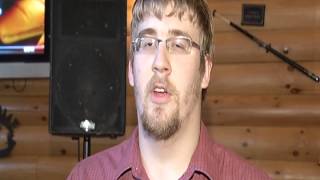 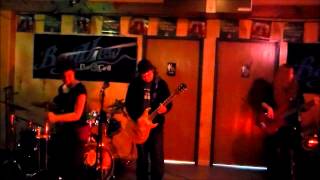 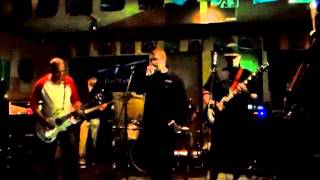 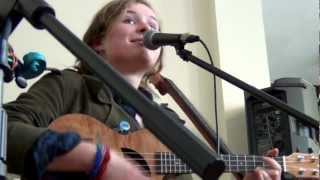 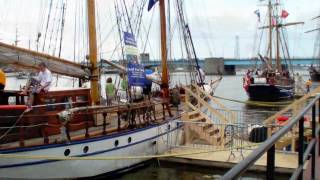 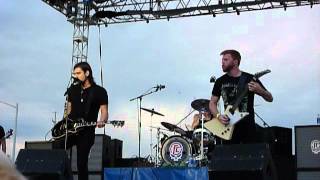 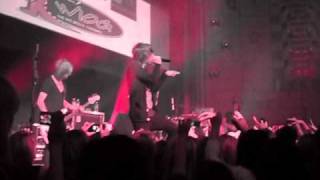 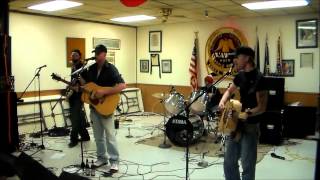 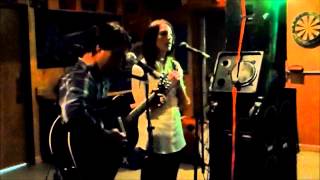 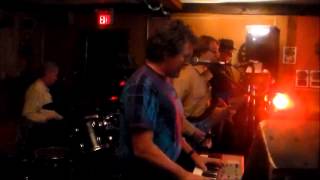 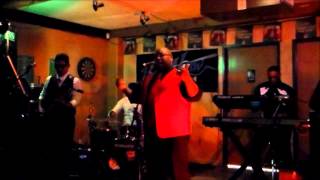 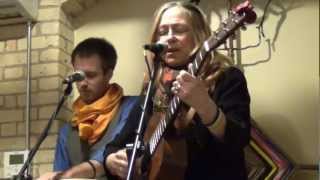 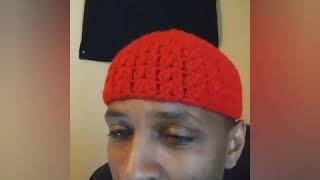 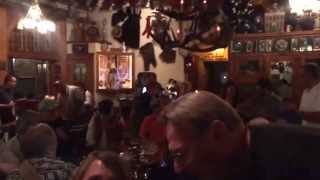