Cannibal Corpse is an American death metal band from Buffalo, New York, now based in Tampa, Florida. Formed in December 1988, the band has released fourteen studio albums, two box sets, four video albums, and two live albums. The band has had little radio or television exposure throughout its career, although a cult following began to build after the release of the 1991 album Butchered at Birth and 1992 album Tomb of the Mutilated. As of 2015, they achieved worldwide sales of two million units for combined sales of all their albums,[1] making them the top-selling death metal band of all time. [2][]

Bassist Alex Webster came up with the name Cannibal Corpse. They have had several lineup changes since their inception, with Webster and drummer Paul Mazurkiewicz as the only constant members. The members of Cannibal Corpse were originally inspired by thrash metal bands like Slayer and Kreator and other death metal bands such as Morbid Angel and Death.[3] The band's album art (most often by Vincent Locke) and lyrics, drawing heavily on horror fiction and horror films, are highly controversial. At different times, several countries, such as Germany and Russia, have banned Cannibal Corpse from performing within their borders, or have banned the sale and display of original Cannibal Corpse album covers.

Cannibal Corpse was established in 1988 by members from earlier Buffalo-area death metal bands Beyond Death (Alex Webster, Jack Owen), Tirant Sin (Paul Mazurkiewicz, Chris Barnes, Bob Rusay), and Leviathan (Barnes). The band played its first show at Buffalo's River Rock Cafe in March 1989, shortly after recording a five-song demo tape, Cannibal Corpse. Within a year of the first gig, the band was signed to Metal Blade Records, apparently after the label had heard their demo that was sent in by the manager of the record store at which Barnes was working.[4] Their full-length debut album, Eaten Back to Life, was released in August 1990.

The band has had several lineup changes over the years. In 1993, founding member and lead guitarist Bob Rusay was dismissed from the group (after which he became a golf instructor) and was ultimately replaced by Malevolent Creation guitarist Rob Barrett.[5] In 1995, during recording sessions for a new album, singer Chris Barnes was dismissed because of personal differences with the rest of the band[6] and was replaced by Monstrosity singer George "Corpsegrinder" Fisher. Barnes went on to perform with the band Six Feet Under and, later, Torture Killer.

In 1997, Barrett, who had originally replaced Rusay on lead guitar, left Cannibal Corpse to rejoin his previous bands Malevolent Creation and Solstice. After Barrett departed, he was replaced by Pat O'Brien, who first appeared on Cannibal Corpse's 1998 release Gallery of Suicide. Founding member and rhythm guitarist Jack Owen left Cannibal Corpse in 2004 to spend more time on his second band, Adrift. He joined Deicide in late 2004. Jeremy Turner of Origin briefly replaced him as rhythm guitarist on 2004's Tour of The Wretched Spawn. Barrett rejoined the band in 2005, this time as rhythm guitarist, and was first featured on the album Kill, released in March 2006.

Writing for the next album began in November 2007, as indicated in an interview with bassist Alex Webster.[7]Evisceration Plague, Cannibal Corpse's eleventh studio album was released February 3, 2009,[8] to a highly positive response from fans. They also released a live DVD in 2011 entitled Global Evisceration. Cannibal Corpse released its twelfth studio album, Torture, in March 2012.[9]

In February 2014, Cannibal Corpse announced that they had begun recording their thirteenth album, A Skeletal Domain, which was released on September 16. "Sadistic Embodiment" was released as a single in July, and all of the names of the songs on the forthcoming album were announced the same day.[10] The same month, Metal Blade announced the publication of the band's authorized biography Bible Of Butchery, written by the British author Joel McIver.[11]

In an August 2016 interview, drummer Paul Mazurkiewicz stated that Cannibal Corpse would likely begin recording a new album in 2017.[12] In September 2017, the band announced their fourteenth studio album, Red Before Black, which was released on November 3.[13]

As of October 23, 1996, the sale of any Cannibal Corpse audio recording then available was banned in Australia and all copies of such had been removed from music shops.[16] At the time, the Australian Recording Industry Association and the Australian Music Retailers Association were implementing a system for identifying potentially offensive records, known as the "labelling code of practice."[17][18]

All ten of Cannibal Corpse's albums, the live album Live Cannibalism, the boxed set 15 Year Killing Spree, the EP Worm Infested, and the single "Hammer Smashed Face" were re-released in Australia between 2006 and 2007, finally classified by ARIA and allowed for sale in Australia. However, they are all "restricted" and only sold to those over 18 years of age. Some are sold in "censored" and "uncensored" editions, which denotes the change of cover art.[19] Despite this, when displayed in some stores, even the "uncensored" editions are censored manually.

All Cannibal Corpse albums up to and including Tomb of the Mutilated were banned upon release from being sold or displayed in Germany due to their graphic cover art and disturbing lyrics; the band was also forbidden to play any songs from those albums while touring in Germany.[21] This prohibition was not lifted until June 2006.[21] In a 2004 interview, George Fisher attempted to recall what originally provoked the ban:

"A woman saw someone wearing one of our shirts, I think she is a schoolteacher, and she just caused this big stink about it. So [now] we can't play anything from the first three records. And it really sucks because kids come up and they want us to play all the old songs -- and we would -- but they know the deal. We can't play 'Born in a Casket' but can play 'Dismembered and Molested'."[22]

Six of the eight planned shows from the band's 2014 Russian tour were canceled after protests from local Orthodox activists. A month before the tour, religious activist Dimitry Tsorionov said Cannibal Corpse's music was punishable under the Russian law because it "incites religious division." He commented unfavorably on the lyrics, saying they promoted "death, violence, as well as various kinds of sexual perversion."[23] The gig in Nizhny Novgorod was stopped halfway through the set, after police entered to search the venue for drugs.[24] The concert in Saint Petersburg was canceled at the last minute because of unspecified "technical reasons." Fans began rioting, and eighteen of them were arrested.[25] Band members stated that Russian authorities threatened to detain them if the band performed because they did not have the correct visas.[24] Cannibal Corpse at a concert in Innsbruck, February 9, 2009.

Cannibal Corpse's lyrics and album/T-shirt artwork frequently feature transgressive and macabre imagery, including depictions of extreme violence and gore; the band has always defended this as artistic expression that is clearly fictional. In an interview for the documentary Metal: A Headbanger's Journey, George Fisher expresses the opinion that death metal is best understood "as art," and claims that far more violent art can be found at the Vatican, pointing out that such depictions are arguably more transgressive because they actually happened.[26] Some examples of Cannibal Corpse's most controversial song titles include "I Cum Blood," "Meat Hook Sodomy," "Entrails Ripped from a Virgin's Cunt," "Necropedophile," "Stripped, Raped, and Strangled," and "Fucked with a Knife."[27]

On the same topic, George "Corpsegrinder" Fisher once said in an interview:

"We don't sing about politics. We don't sing about religion...All our songs are short stories that, if anyone would so choose they could convert it into a horror movie. Really, that's all it is. We like gruesome, scary movies, and we want the lyrics to be like that. Yeah, it's about killing people, but it's not promoting it at all. Basically these are fictional stories, and that's it. And anyone who gets upset about it is ridiculous."[28]

In response to accusations that his band's lyrics desensitize people to violence, Alex Webster argued death metal fans enjoy the music only because they know the violence depicted in its lyrics is not real:

"I think people probably aren't that desensitized to it, you know including myself, like you know, we sing about all this stuff and you watch a movie where you know it's not real and it's no big deal, but if you really saw someone get their brains bashed in right in front of you, I think it would have a pretty dramatic impact on any human being you know what I mean? Or some terrible, gross act of violence or whatever done right in front of you, I mean you'd react to it, no matter how many movies you've watched or how much gore metal you've listened to or whatever, I'm sure it's a completely different thing when it's right in front of you. Even though we've got crazy entertainment now, our social realities are actually a bit more civilized than they were back then, I mean we're not hanging people or whipping them in the street and I think that's positive improvement for any society in my opinion."[29]

He also believes the violent lyrics can have positive value: "It's good to have anger music as a release."[30] George Fisher explained the content of their songs: "There's nothing ever serious. We're not thinking of anybody in particular that we're trying to kill, or harm or anything."[31] 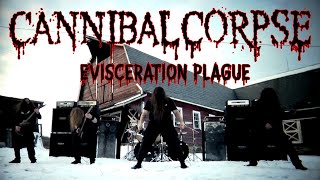 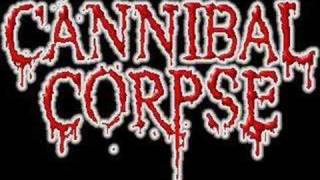 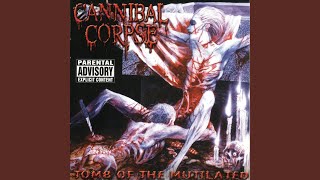 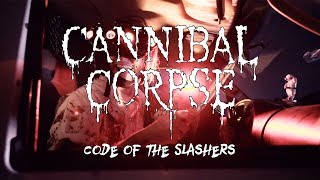 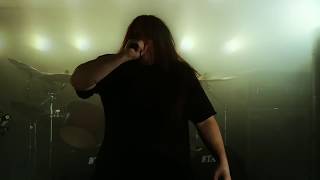 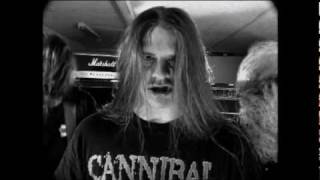 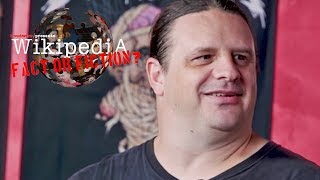 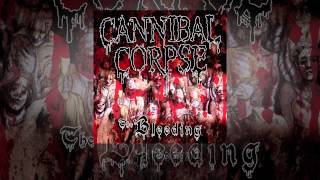 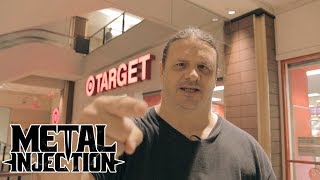 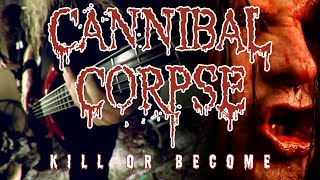 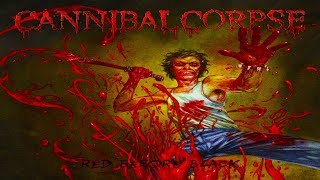 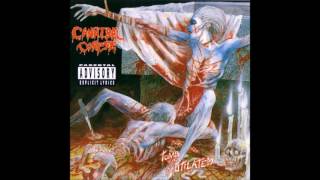 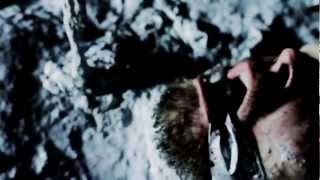 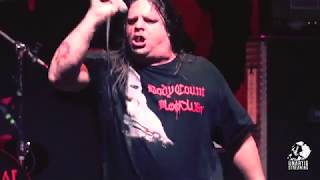 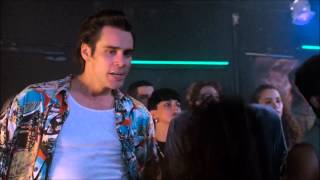 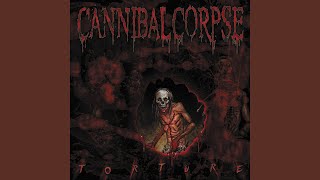 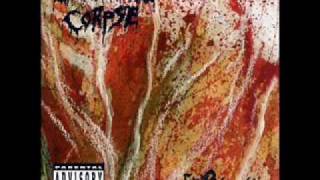