Since 1994 the airport has been a major hub for UPS Airlines, which has two facilities at the airport. In terms of passenger service, the airport offers year-round direct service to five destinations, along with seasonal destinations. The Federal Aviation Administration (FAA) National Plan of Integrated Airport Systems for 2017-2021 categorized it as a non-hub primary commercial service facility.[4]

RFD traces its history to 1917 when Camp Grant was established by the U.S. Army as one of the largest military training facilities in the United States. At the end of 1923, the Army closed Camp Grant as an active facility, transferring it to the Illinois National Guard. In 1941, the facility was reactivated by the Army. During World War II, Camp Grant served as one of the largest Army induction and training centers in the United States, training medical personnel, and serving as a prisoner of war confinement center. Following the end of the war, the facility served as a separation center. In 1946, Camp Grant was shut down for the second (and final) time.

After World War II Illinois adopted the Airport Authority Act; the Greater Rockford Airport Authority was created in 1946.[5] In 1948, the Camp Grant land was officially transferred to the airport authority from the federal government. Of the 5,460 acres (plus a 6,000 acre rifle range) of Camp Grant, the airport authority acquired the western 1,500 acres of the facility,[5] bordered by the Rock River to the north and the Kishwaukee River to the south. In 1954, construction commenced on the airport and terminal.[5]

The airport demolished the final remaining Camp Grant buildings on the airport property in 1974.[5] In an effort to expand passenger airline service, the current passenger terminal was built in 1987. United Parcel Service opened the first of two cargo facilities at the airport in 1994. While its centralized location in northern Illinois was a selling point for cargo service, scheduled passenger airline service struggled, ending in 2001. In the 1980s and 1990s, Rockford had passenger service to O'Hare Airport, but many passengers considered bus service or driving to Chicago a viable alternative. In 2003, the airport restored passenger service; instead of offering regional service to Chicago or elsewhere in the Midwest, the airport presented itself as an alternative for leisure-based travelers, offering low-cost flights to Florida.

Coleman Air Transport had a small hub at RFD in the late 1970s with Grumman Gulfstream Is and was planning to introduce Douglas DC-9-10 nonstop to New York LaGuardia Airport before losing its operating certificate and going out of business.[6]

The first airline flights were on Mid-Continent Airlines in 1950. Successor Braniff pulled out in 1955, leaving Ozark, which had arrived in 1951. Ozark Douglas DC-9-10s and McDonnell Douglas DC-9-30s flew nonstop to Chicago O'Hare Airport and direct to Denver in 1976.[7] TWA flew Boeing 727s Rockford to Chicago O'Hare for a couple years starting May 1980. McClain Airlines Boeing 727-100s flew nonstop to Chicago O'Hare. The original Frontier Airlines (1950-1986) Boeing 737-200s served Rockford from 1984 until late 1986 nonstop to Cedar Rapids, Madison and Milwaukee and direct to Denver[8] when the operation was transferred to Britt Airways which flew turboprops for a short time. Direct Air served the airport until March 2012.[9] The current version of Frontier offered mainline service to Denver until 2013. It also offered several charter flights, on behalf of Apple Vacations.[10]

Apple Vacations offered scheduled flights to the vacation destinations of Cancún, Montego Bay, and Punta Cana for many years, through operators such as Norwegian Air Shuttle and TUI Airways.[11][12]

In an effort to capitalize on its location (less than 90 miles (145 km) from downtown Chicago and about 30 miles (48 km) from the outermost Chicago suburbs), the Greater Rockford Airport underwent several name changes in the 2000s. Initially changing to the Northwest Chicagoland Regional Airport at Rockford in the early 2000s, in 2004, the airport became an official US port of entry and achieved international status. To reflect the change, it was renamed again, becoming the Chicago/Rockford International Airport (the slash was removed in 2007),[13] bringing it in line with the two "Chicago" airports (O'Hare and Midway). In many forms of media, the airport also markets itself by its three FAA/IATA call letters: RFD.

The Rockford airport has played host to airshows in several capacities, often becoming one of the largest events in Northern Illinois. In 1959 the Experimental Aircraft Association (EAA) moved its annual fly-in from Timmerman Field in Milwaukee to the Greater Rockford Airport after outgrowing the smaller Wisconsin airfield. In 1960, 1000 people attended, leading to growth each year through the 1960s.[16] 1969 would be the final year for the EAA fly-in in Rockford, as it had outgrown the Rockford airport. For 1970, the EAA would move its annual convention/fly-in to Wittman Regional Airport in Oshkosh, Wisconsin, where it has been held ever since.

The Airfest was indefinitely canceled in 2016. Airport officials say "The airport has become too busy to shut down the airport for a weekend."[17]

The current terminal was built in 1987 in an effort to expand airline service in Rockford, but bus service to O'Hare International Airport kept most airlines away from Rockford.[] Passenger service was lost completely from 2001 to 2003.[] An upgrade to the terminal in 2005 brought more jetways, escalators, and improved baggage handling equipment (the previous system catered to smaller turboprop aircraft rather than jets).[] In 2013, the terminal was renamed the Donald A. Manzullo International Terminal.[18][19] In 2017, the airport received a grant to expand both passenger terminals and cargo areas.[20]

The airport is in a foreign-trade zone. As runway 7/25 is 10,000 feet (3,000 m) long, a variety of large aircraft can land at RFD; the largest aircraft landed at RFD is the Antonov An-124 Ruslan.[] In addition to the passenger terminal, the airport is home to three cargo ramps. Next to the main terminal ramp, the 50-acre north cargo ramp is home to the Rockford Regional Air Hub of UPS Airlines that was constructed in 1994. The largest ramp at the airport, it has parking spaces for up to 40 jet aircraft.

Between the two runways, the smaller south ramp is home to one of two FBOs at the airport. In 2015, the former BAX Global (through Air Transport International/ATI) and DHL Express (ABX Air) cargo facilities were demolished to begin construction on a 200,000 square foot MRO facility owned and operated by AAR Corporation, which was opened in 2016.[21]

Southwest of the UPS ramp, in 2008, the airport built a third cargo ramp and a 72,000 square foot warehouse.[22] In 2016, the facilities were leased for the first time to ABX Air to transfer air freight to trucks through the facility.[22] View of main terminal from runway. 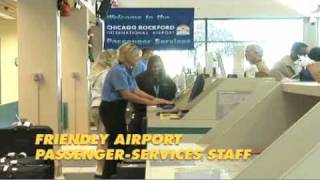 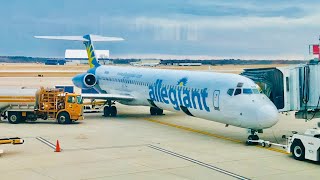 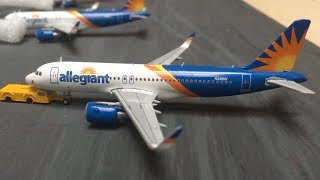 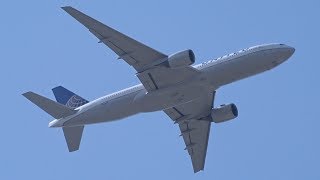 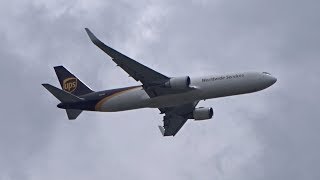 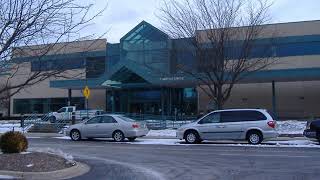 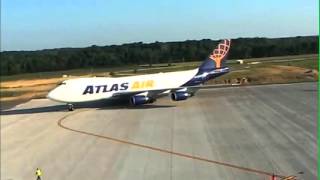 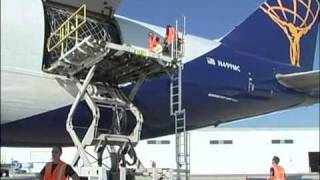 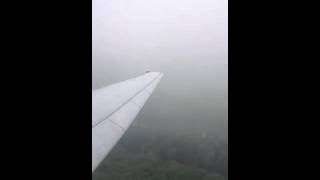 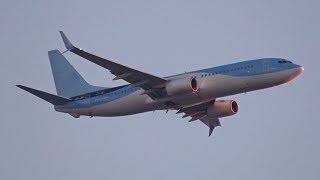 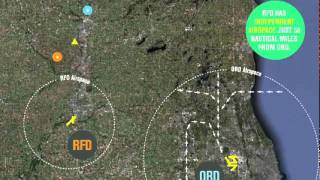 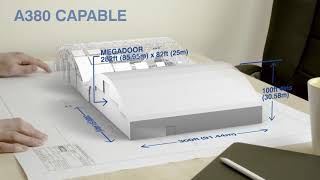 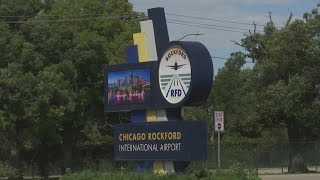 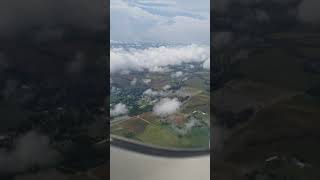 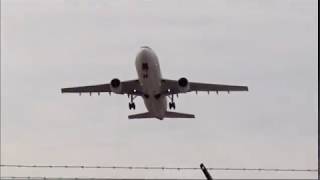 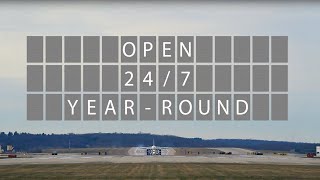 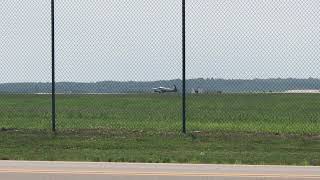 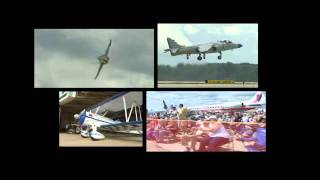