The Georgia Bulldogs football program represents the University of Georgia in the sport of American football. The Bulldogs compete in the Football Bowl Subdivision (FBS) of the National Collegiate Athletic Association (NCAA) and the Eastern Division of the Southeastern Conference (SEC). They play their home games at historic Sanford Stadium on the university's Athens, Georgia, campus. Georgia's inaugural season was in 1892. UGA claims two consensus national championships (1942 and 1980); the AP and Coaches Polls have each voted the Bulldogs the national champion once (1980); Georgia has also been named the National Champion by at least one polling authority in three other seasons (1927, 1946 and 1968).[5] The Bulldogs have won 15 conference championships, including 13 SEC championships (tied for second-most all-time), and have appeared in 54 bowl games, tied for second-most all-time. The program has also produced two Heisman Trophy winners, four number-one National Football League (NFL) draft picks, and many winners of other national awards. The team is known for its storied history, unique traditions, and rabid fan base. Georgia has won over 800 games in their history, placing them 11th all-time in wins.[6]

Head coaches of the Bulldogs dating from 1892.[10][better source needed]

The first mention of "Bulldogs" in association with Georgia athletics occurred on November 28, 1901, at the Georgia-Auburn football game played in Atlanta. The Georgia fans had a badge saying "Eat `em Georgia" and a picture of a bulldog tearing a piece of cloth"; however, it was not until 1920 that the nickname "Bulldog" was used to describe the athletic teams at the University of Georgia. Traditionally, the choice of a Bulldog as the UGA mascot was attributed to the alma mater of its founder and first president, Abraham Baldwin, who graduated from Yale University.[11] Prior to that time, Georgia teams were usually known as the "Red and Black." On November 3, 1920, Morgan Blake of the Atlanta Journal wrote a story about school nicknames and proposed:

The Georgia Bulldogs would sound good because there is a certain dignity about a bulldog, as well as ferocity.[12]

After a 0-0 tie with Virginia in Charlottesville on Nov. 6, 1920, Atlanta Constitution writer Cliff Wheatley used the name "Bulldogs" in his story five times. The name has been used ever since. Georgia's standard home uniform has not significantly changed since 1980, and consists of a red helmet with the trademarked oval G, red jerseys, and famous silver britches.[15]

Wally Butts first introduced the "silver britches", as they are colloquially known, in 1939. When Vince Dooley became Georgia's head coach, he changed the team's home uniform to include white pants. The uniform was changed back to silver pants prior to the 1980 season, and has remained silver ever since.[15]

Georgia's earliest helmet was grey leather, to which a red block "G" logo was added in 1961. The shirts were usually red, sometimes with various striping patterns. Their uniforms in the pre-World War II era varied at times, sometimes significantly. Photographic evidence suggests that black shirts, vests, and stripes of various patterns were worn at times over the years.

Vince Dooley was the first to incorporate a red helmet into the uniform in 1964, adopting the oval "G", a white stripe, and white facemasks. Anne Donaldson, who graduated from Georgia with a BFA degree and was married to Georgia assistant coach John Donaldson, was asked by Dooley to come up with a new helmet design to replace the previous silver helmet. Dooley liked the forward oriented stylized "G" Donaldson produced, and it was adopted by him. Since the Georgia "G" was similar to the Green Bay Packers' "G" used since 1961, Coach Dooley cleared its use with the Packers organization. Nonetheless, Georgia has a registered trademark for its "G" and the Packers' current, redesigned, "G" logo is modeled after the University of Georgia's redesign of Green Bay's original "G" logo. The helmet change was part of a drastic uniform redesign by Dooley, who also replaced the traditional silver pants with white pants that included a black-red-black stripe. The jerseys remained similar to the pre-1964 design, however, with a red jersey and white numbers.

Prior to the 1980 season, the "silver britches" were re-added to Georgia's uniform with a red-white-black stripe down the side. Since the 1980 season, Georgia has utilized the same basic uniform concept. The sleeve stripes, trim colors, and font on Georgia's home and away jerseys have varied many times, but the home jerseys have remained generally red with white numbers, and away jerseys have remained generally white with black numbers.

The most recent trim redesign occurred in 2005, when sleeve stripe patterns were dropped in favor of solid black jersey cuffs on the home jersey and solid red cuffs on the away jersey. Matte gray pants have also been used at times instead of "true" silver since 2004, mainly because the matte gray pants are of a lighter material.

One of the things that make Georgia's uniform unique is its relative longevity, and the fact that it has very rarely changed over the years. There have been occasions, however, when alternate uniforms have been worn.

The Bulldogs have three main football rivals: Auburn, Florida, and Georgia Tech. All three rivalries were first contested over 100 years ago, though the series records are disputed in two cases. Georgia does not include two games from 1943 and 1944 against Georgia Tech (both UGA losses) in its reckoning of the series record, because Georgia's players were in World War II and Georgia Tech's players were not. Georgia also includes a game against one of the four predecessor institutions of the modern University of Florida in 1904 (a Georgia win) that national sportswriters[22][23][24] and Florida's athletic association do not include.

Georgia has long-standing football rivalries with other universities as well, with over 50 games against five additional teams. Since the formation of the SEC Eastern Division in 1992, Georgia has had an emerging rivalry with the Tennessee Volunteers. The Georgia-South Carolina football rivalry has been a game of increasing importance; South Carolina won the SEC Eastern Division Championship in 2010, Georgia in 2011 and 2012.

The Bulldogs have played in 54 bowl games, tied for second all-time. UGA has a bowl record of 31-20-3. Their 31 wins rank the Dawgs third all-time in bowl wins.[25] They have played in a record 17 different bowls including appearances in five of the New Years Six Bowl Games (2 Rose, 3 Orange, 3 Cotton, 5 Peach and 9 Sugar Bowls) and an appearance in the 2018 College Football Playoff National Championship.

Additional seasons with selections appearing in the NCAA Record Book.[29]:111-115

Georgia has won a total of 15 conference championships, ten outright and five shared. The school's 13 Southeastern Conference Championships rank it second all time in SEC history, tied with Tennessee behind only Alabama.[30]

The Georgia Bulldogs football players that have been selected as All-Americans are:

Two former Georgia players have been inducted into the Pro Football Hall of Fame.[33]

Seventeen former Georgia players and coaches have been inducted in the College Football Hall of Fame.[15] In addition, one former player, Pat Dye, has been inducted into the Hall as a coach for Auburn.[34]

Georgia plays Auburn as a permanent non-division opponent annually and rotates around the West division among the other six schools.[35] 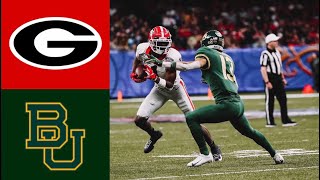 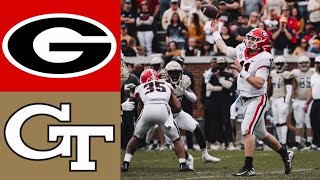 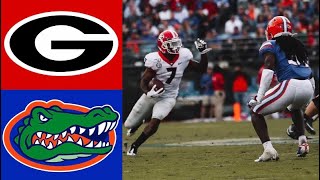 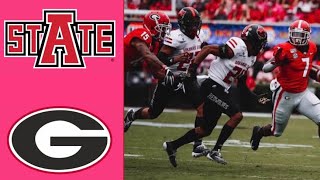 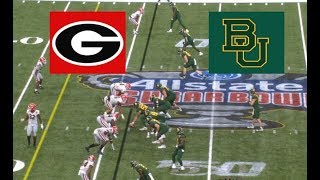 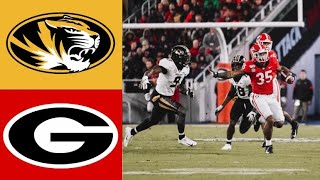 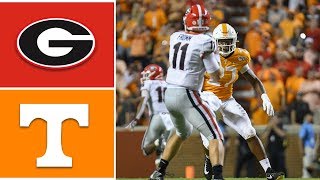 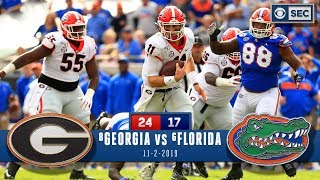 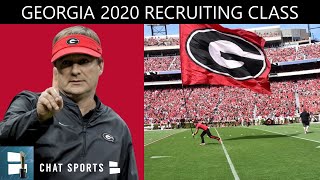 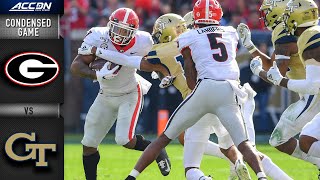 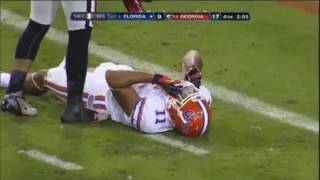 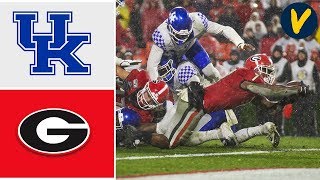 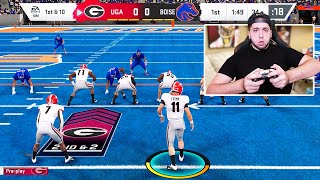 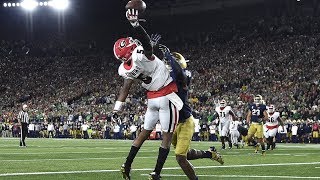 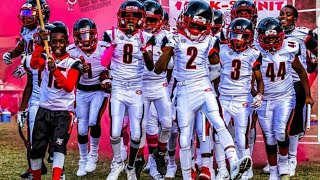 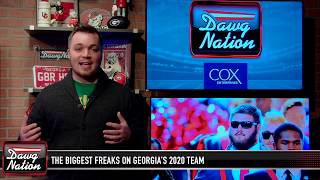 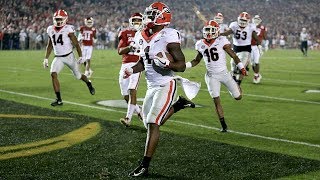 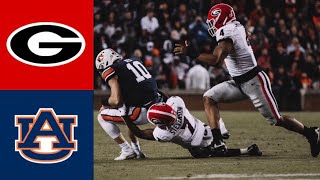