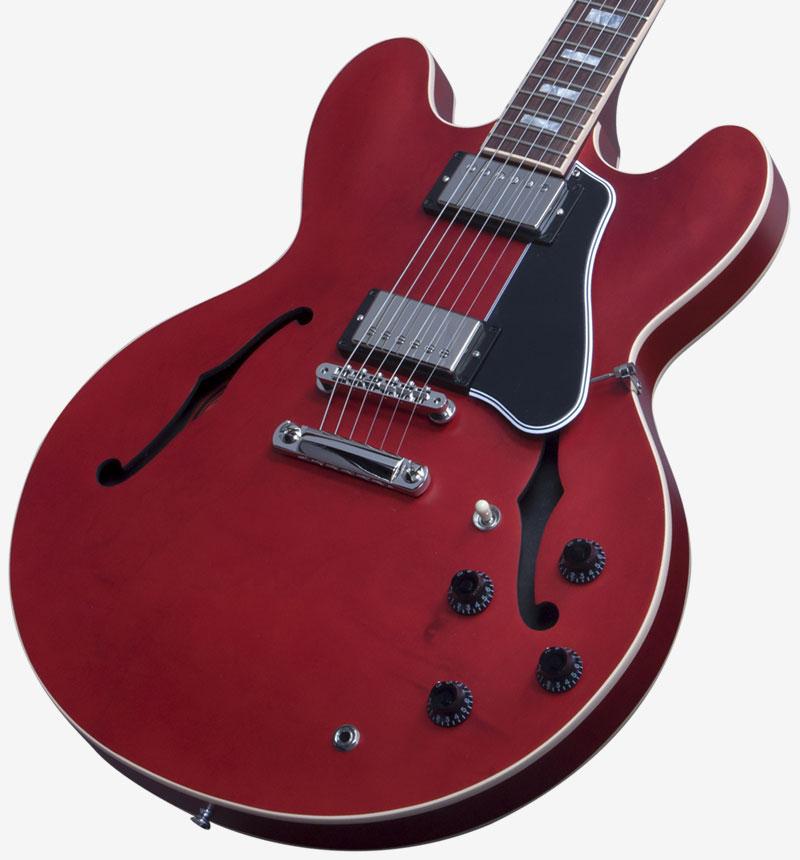 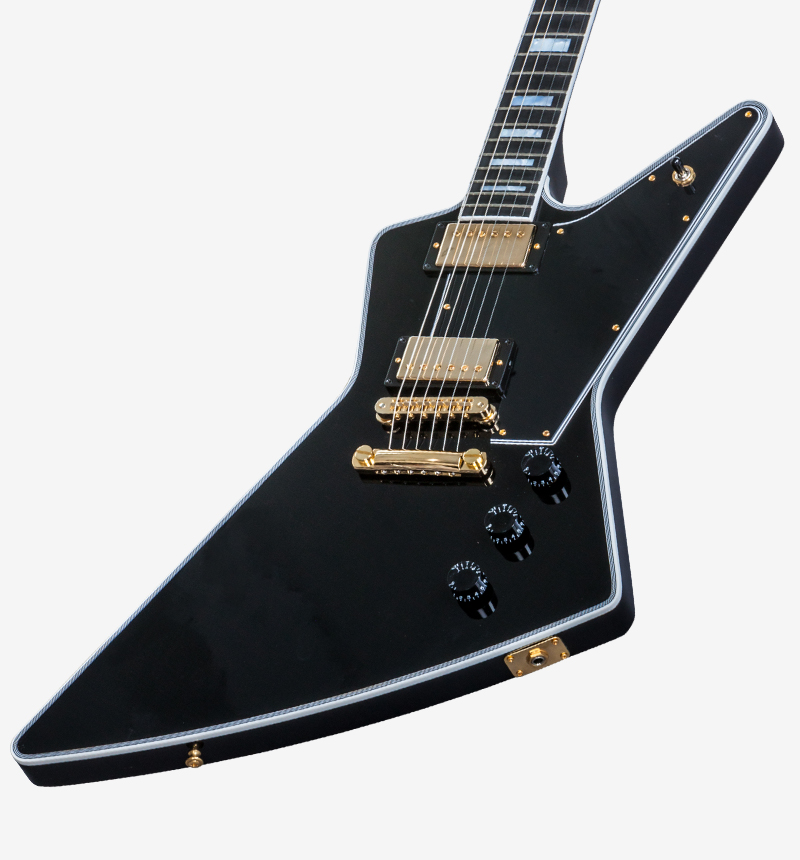 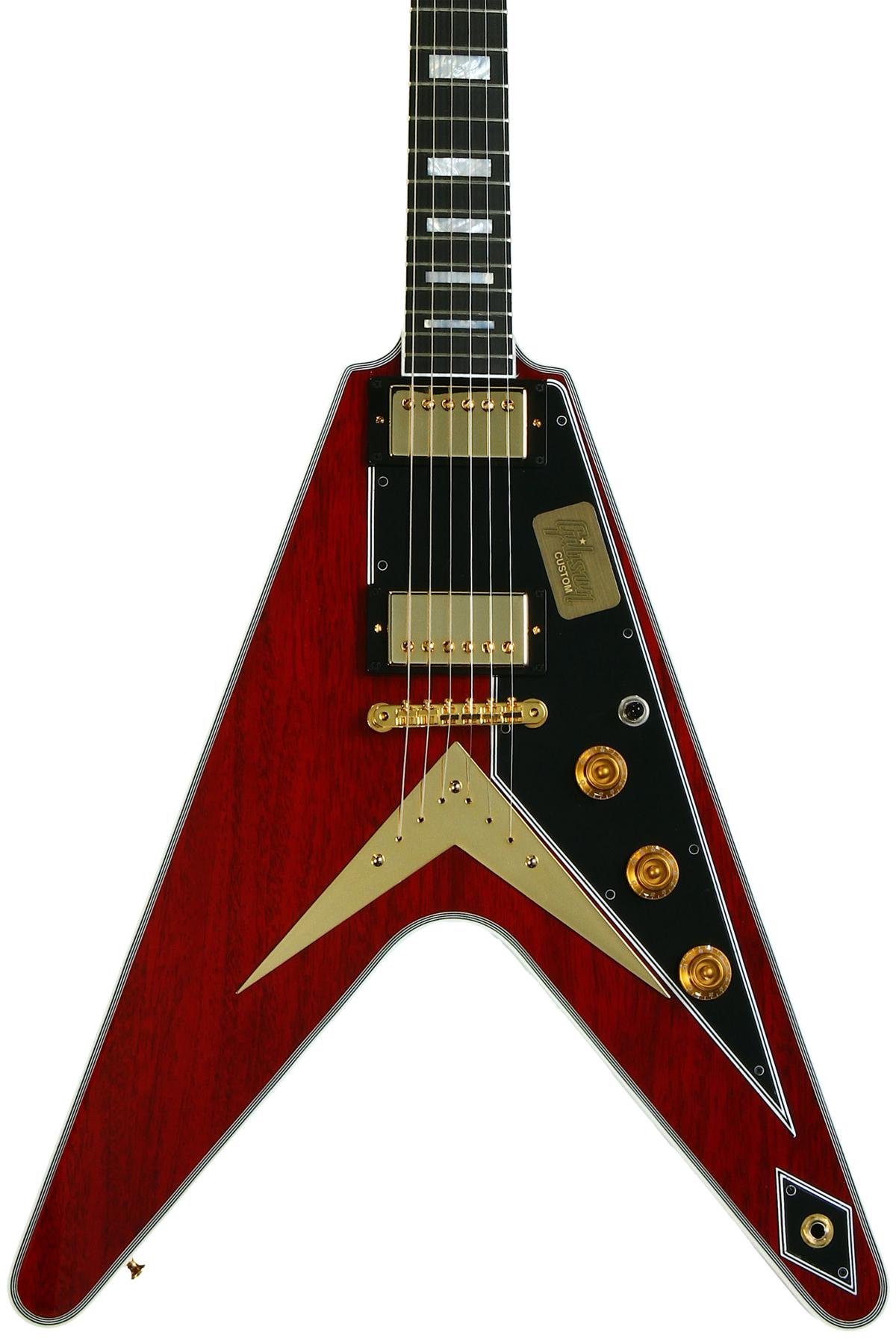 Orville Gibson founded the company in 1902 as "The Gibson Mandolin-Guitar Mfg. Co., Ltd." in Kalamazoo, Michigan to make mandolin-family instruments.[1] Gibson invented archtop guitars by constructing the same type of carved, arched tops used on violins. By the 1930s, the company was also making flattop acoustic guitars, as well as one of the first commercially available hollow-body electric guitars, used and popularized by Charlie Christian. In 1944, Gibson was bought by Chicago Musical Instruments (CMI) which was acquired in 1969 by Panama-based conglomerate, Ecuadorian Company Limited (E.C.L.) that changed its name in the same year to Norlin Corporation.

Gibson sells guitars under a variety of brand names[5] and builds one of the world's most iconic guitars, the Gibson Les Paul. Many Gibson instruments are highly collectible. Gibson was at the forefront of innovation in acoustic guitars, especially in the big band era of the 1930s; the Gibson Super 400 was widely imitated. In 1952, Gibson introduced its first solid-body electric guitar, the Les Paul which became its most popular guitar to date-- designed by Ted McCarty and Les Paul.

Gibson was owned by the Norlin corporation from 1969 to 1986. In 1986, the company was acquired by its present owners. Gibson is a privately held corporation owned by its chief executive officer Henry Juszkiewicz and its president David H. Berryman.

Orville Gibson patented a single-piece mandolin design in 1898 that was more durable than other mandolins and could be manufactured in volume.[7] Orville Gibson began to sell his instruments in 1894 out of a one-room workshop in Kalamazoo Michigan. In 1902 Gibson Mandolin-Guitar Mfg. Co, Ltd. was incorporated to market the instruments. Initially, the company produced only Orville Gibson's original designs.[8] Orville died in 1918 of endocarditis (inflammation of the inside lining of the heart chambers and valves).[7]

The following year the company hired designer Lloyd Loar to create newer instruments.[8] Loar designed the flagship L-5 archtop guitar and the Gibson F5 mandolin that was introduced in 1922, before leaving the company in 1924.[9] In 1936 Gibson introduced their first "Electric Spanish" model, the ES-150 followed by other electric instruments like steel guitars, banjos and mandolins.

During World War II, instrument manufacturing at Gibson slowed due to shortages of wood and metal, and Gibson began manufacturing wood and metal parts for the military. Between 1942-1945, Gibson employed women to manufacture guitars. "Women produced nearly 25,000 guitars during World War II yet Gibson denied ever building instruments over this period," according to a 2013 history of the company. Gibson folklore has also claimed its guitars were made by "seasoned craftsmen" who were "too old for war."[10][11]

In 1944 Gibson was purchased by Chicago Musical Instruments. The ES-175 was introduced in 1949. Gibson hired Ted McCarty in 1948, who became President in 1950. He led an expansion of the guitar line with new guitars such as the "Les Paul" guitar introduced in 1952 and designed by Les Paul, a popular musician in the 1950s and also a pioneer in music technology. The Les Paul was offered in Custom, Standard, Special, and Junior models.[12] In the mid-50s, the Thinline series was produced, which included a line of thinner guitars like the Byrdland. The first Byrdlands were slim, custom built, L-5 models for guitarists Billy Byrd and Hank Garland. Later, a shorter neck was added. Other models such as the ES-350T and the ES-225T were introduced as less costly alternatives.[13] In 1958, Gibson introduced the ES-335T model. Similar in size to the hollow-body Thinlines, the ES-335 family had a solid center, giving the string tone a longer sustain.

In the 1950s, Gibson also produced the Tune-o-matic bridge system and its version of the humbucking pickup, the PAF ("Patent Applied For"), first released in 1957 and still sought after for its sound.[] In 1958, Gibson produced two new designs: the eccentrically shaped Explorer and Flying V. These "modernistic" guitars did not sell initially. It was only in the late 1960s and early 70s when the two guitars were reintroduced to the market that they sold well. The Firebird, in the early 60s, was a reprise of the modernistic idea, though less extreme.

In the late 50s, McCarty knew that Gibson was seen as a traditional company and began an effort to create more modern guitars. In 1961 the body design of the Les Paul was changed due to the demand for a double-cutaway body design.[14] The new body design then became known as the SG (for "solid guitar"), due to disapproval from Les Paul himself. The Les Paul returned to the Gibson catalog in 1968.

Between 1974 and 1984 production of Gibson guitars was shifted from Kalamazoo to Nashville, Tennessee. The Kalamazoo plant kept going for a few years as a custom-instrument shop, but was closed in 1984; several Gibson employees led by plant manager Jim Duerloo established Heritage Guitars in the old factory, building versions of classic Gibson designs.

The company (Gibson) was within three months of going out of business before it was bought by Henry E. Juszkiewicz, David H. Berryman, and Gary A. Zebrowski in January 1986.[15] New production plants were opened in Memphis, Tennessee, as well as Bozeman, Montana. The Memphis facility is used for semi-hollow and custom shop instruments, while the Bozeman facility is dedicated to acoustic instruments.[16]

In 1977 Gibson sued Hoshino/Elger for copying the Gibson Les Paul.[17] In 2000, Gibson sued Fernandes Guitars in a Tokyo court for allegedly copying Gibson designs. Gibson did not prevail.[18] Gibson also sued PRS Guitars in 2005, to stop them from making their Singlecut model. The lawsuit against PRS was initially successful.[19] However, the United States Court of Appeals for the Sixth Circuit reversed the lower court decision and ordered the dismissal of Gibson's suit against PRS.[20]

Gibson purchased Garrison Guitars in 2007.[21] In mid 2009 Gibson reduced its work force to adjust for a decline in guitar industry sales in the United States.[22]

In 2013, Gibson acquired a majority stake in TEAC Corporation.

In 2014, Gibson acquired the consumer electronics business of Royal Philips.

Gibson's factories were raided in 2009 and 2011 by agents of the United States Fish and Wildlife Service (FWS). In November 2009 authorities found illegally imported ebony wood from Madagascar.[25][26] A second raid was conducted in August 2011,[25] during which the FWS seized wood imports from India that had been mislabeled on the US Customs declaration.[27][28] Gibson Guitar Corp. filed a motion in January 2011 to recover seized materials and overturn the charges, which was denied by the court.[29][30]

The United States Department of Justice found emails from 2008 and 2009 in which Gibson employees discussed the "gray market" nature of the ebony wood available from a German wood dealer--who obtained it from a supplier in Madagascar--as well as plans to obtain the wood. It filed a civil proceeding in June 2011,[28][31][32] the first such case under the amended Lacey Act, which requires importing companies to purchase legally harvested wood and follow the environmental laws of the producing countries regardless of corruption or lack of enforcement.[32] Gibson argued in a statement the following day that authorities were "bullying Gibson without filing charges" and denied any wrongdoing.[27][33] Arguing against the federal regulations and claiming that the move threatened jobs, Republicans and tea party members spoke out against the raids and supported Juszkiewicz.[34]

The case was settled on August 6, 2012, with Gibson admitting to violating the Lacey Act and agreeing to pay a fine of $300,000 in addition to a $50,000 community payment. Gibson also forfeited the wood seized in the raids, which was valued at roughly the same amount as the settlement.[35][36] However, in a subsequent statement Gibson maintained its innocence with Juszkiewicz claiming that "Gibson was inappropriately targeted" and that the government raids were "so outrageous and overreaching as to deserve further Congressional investigation." Juszkiewicz continued to state, "We felt compelled to settle as the costs of proving our case at trial would have cost millions of dollars and taken a very long time to resolve."[37]

The case raised concerns for musicians who lack documentation of vintage instruments made of traditional, non-sustainable materials.[38][39] However, officials from the Justice Department and the U.S. Fish and Wildlife Service have stated that musicians who unknowingly possess instruments made from illegal wood would not be treated as criminals.[40]

Gibson was able to reclaim some wood stock which was confiscated during the raids,[41] and produced a new series of guitar marketed to draw attention to the raids and seizures.[42] This is discussed in the Instruments section below.

Although it is well known for its guitars, Gibson's largest business is in fact electronics. Gibson offers consumer audio equipment devices through its subsidiaries Gibson Innovations (Philips brand), Onkyo Corporation(Onkyo and Pioneer brands), TEAC Corporation (Teac and Esoteric brands), Cerwin Vega and Stanton,[6] as well as professional audio equipment from KRK Systems and TEAC Corporation/TASCAM and music software from Cakewalk.[50]

Gibson makes authorized copies of its most successful guitar designs. They are less expensive than those bearing the Gibson name. A former competitor, Epiphone was purchased by Gibson and now makes competitively priced Gibson models, such as the Les Paul and SG, sold under the Epiphone brand,[51] while continuing to make Epiphone-specific models like the Sheraton and Casino. In Japan, Orville by Gibson once made Gibson designs sold in that country.[52] Gibson has sought legal action against those that make and sell guitars Gibson believes are too similar to their own.

In 1977, Gibson introduced the serial numbering system in use until 2006.[53] An eight-digit number on the back shows the date when the instrument was produced, where it was produced, and its order of production that day (e.g., first instrument stamped that day, second, etc.).[54] As of 2006, the company used seven serial number systems,[53] making it difficult to identify guitars by their serial number alone.[53][54] and as of 1999 the company has used six distinct serial numbering systems.[54] An exception is the year 1994, Gibson's centennial year; many 1994 serial numbers start with "94", followed by a six-digit production number[]. The Gibson website provides a book to help with serial number deciphering.[54]

In 2006, Gibson introduced a nine-digit serial number system replacing the eight-digit system used since 1977, but the sixth digit now represents a batch number.[53]

In 2003,[55] Gibson debuted its Ethernet-based[56] audio protocol, MaGIC, which it developed in partnership with 3COM, Advanced Micro Devices, and Xilinx.[55] Replacing traditional analog hook-ups with a digital connection that would, "...satisfy the unique requirements of live audio performances," may have been the goal of this project.[56] This system may require a special pickup,[55] but cabling is provided by a standard Cat-5 ethernet cable.[55][56]

The Gibson "self-tuning guitar", also known as a "robot model", an option on some newer Les Paul, SG, Flying V and Explorer instruments, will tune itself in little more than two seconds using robotics technology developed by Tronical GmbH.[57] Under the tradename Min-ETune, this device became standard on several models in 2014.[58]

In 2013 Gibson introduced the Government Series of Les Paul, SG, Flying V, Explorer & ES-335 guitars which were constructed solely of tonewood the US government seized but later returned to Gibson after the resolution of the company's Lacey Act violation in 2011. The guitars were finished in "government grey" and also featured decorations which intended to draw attention to the issue of government. A year later in 2014, Gibson released the Government Series II[59] of guitars; which were essentially the same as the first series, only finished in a new color: "government tan". Guitars from both the original and the second Government Series have since become highly sought after by players & collectors alike, often fetching between $1,200 and $3,000 on eBay.

This article uses material from the popflock.com resource page available here. It is released under the Creative Commons Attribution-Share-Alike License 3.0. 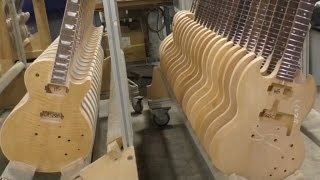 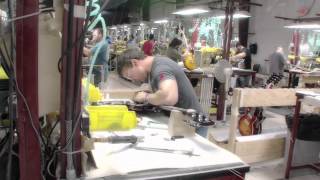 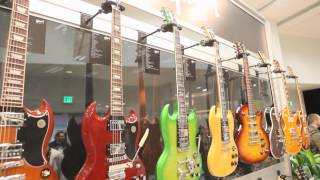 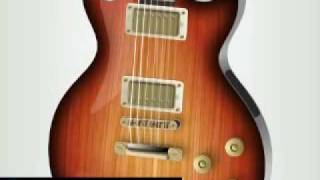 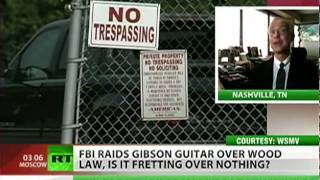 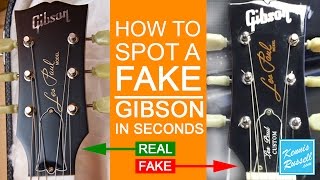 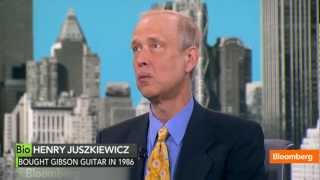 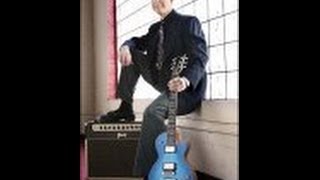 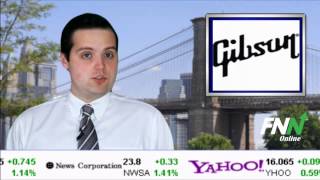 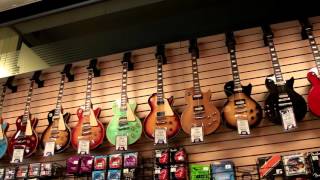 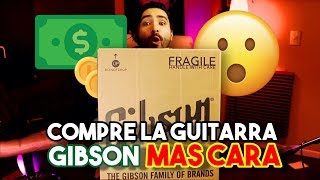 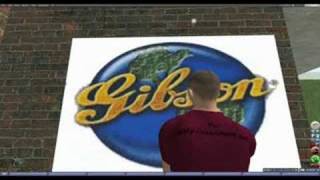 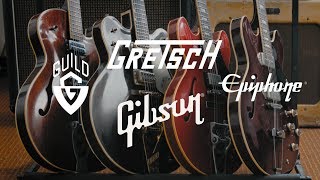 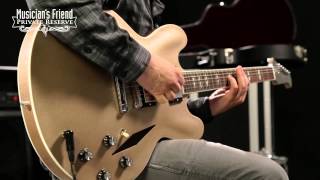 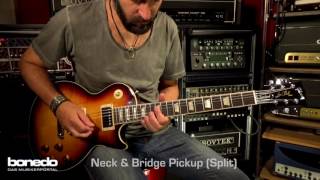 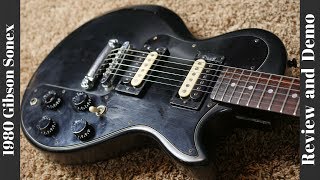