Little Rock Central High School (LRCHS) is an accredited comprehensive public high school in Little Rock, Arkansas, United States. The school was the site of forced desegregation in 1957 after the U.S. Supreme Court ruled that segregation of public schools was unconstitutional three years earlier. This was during the period of heightened activism in the civil rights movement.[8]

Central is located at the intersection of Park Street and Daisy L. Gatson Bates Drive (formerly 14th Street).[9] Bates was an African-American journalist and state NAACP president who played a key role in bringing about, through the 1957 crisis, the integration of the school.

Central can trace its origins to 1869 when the Sherman School operated in a wooden structure at 8th and Sherman streets; it graduated its first class on June 13, 1873. In 1885 the Sherman School was moved to 14th and Scott streets and was named Scott Street School, but was more commonly called City High School. Five years later in 1890, the Peabody School was constructed at West Capitol and Gaines streets. It was named in honor of philanthropist George Peabody from US$200,000 received via the Peabody Education Fund. In 1905, the city founded Little Rock High School at the intersection of 14th and Cumberland streets, and shuttered the Peabody and Scott Street schools to serve as the city's sole public high school. At the time only white students were enrolled.

In 1927 at a cost of US$1.5 million, the city completed construction on the nation's largest and most expensive high school facility, which remains in use today. In 1953 with the construction of Hall High School, the school was renamed as Little Rock Central High School. It has since been listed on the U.S. National Register of Historic Places and named as a U.S. National Historic Landmark and National Historic Site.

Built in 1927 at a cost of $1.5 million, Little Rock Senior High School was designed in the Gothic Revival style; it was hailed as the most expensive, most beautiful, and largest high school in the nation. Statues of four figures over the front entrance represent ambition, personality, opportunity, and preparation.[11] Its opening earned national publicity, with nearly 20,000 people attending the dedication ceremony. In 1953 it was renamed as Little Rock Central High School.

At the time in Arkansas and other states across the South, public school educational facilities were legally racially segregated. In 1954 the US Supreme Court ruled in Brown v. Board of Education that such segregation in public schools was unconstitutional, and encouraged the states to integrate their schools. Related historic events in the 1950s changed education at Central High School and throughout the United States.

LRCHS was the focal point of the Little Rock Integration Crisis of 1957.[8] Nine Black students, known as the Little Rock Nine, were denied entrance to the school in defiance of the 1954 U.S. Supreme Court ruling ordering integration of public schools.[8] This provoked a showdown between the Governor Orval Faubus and President Dwight D. Eisenhower that gained international attention.[8]

On the morning of September 23, 1957, the nine Black high school students faced an angry mob of over 1,000 Whites in front of Central High School who were protesting the integration project.[8] As the students were escorted inside by the Little Rock police, violence escalated, and they were removed from the school.[8] The next day, Eisenhower ordered the 1,200-man 327th Airborne Battle Group of the U.S. Army's 101st Airborne Division from Fort Campbell, Kentucky, to escort the nine students into the school.[8] By the same order, he federalized the entire 10,000-man Arkansas National Guard, in order to remove them from the control of Governor Faubus.[8] At nearby Camp Robinson, a hastily organized Task Force 153rd Infantry drew guardsmen from units all over the state.[8] Most of the Arkansas Guard was quickly demobilized, but the ad hoc Task Force 153rd Infantry assumed control at Thanksgiving when the 327th withdrew, and patrolled inside and outside the school for the remainder of the school year. As Melba Pattillo Beals, one of the nine students, wrote in her diary, "After three full days inside Central [High School], I know that integration is a much bigger word than I thought."[12]

This event, watched by the nation and world, was the site of the first important test for the implementation of the U.S. Supreme Court's Brown v. Board of Education decision of 1954.[8] Many areas of the South pledged to resist this ruling. Arkansas' governor Orval Faubus questioned the authority of the federal court system and the validity of desegregation. The crisis at Little Rock's Central High School was the first fundamental test of the national resolve to enforce black civil rights in the face of massive resistance during the years following the Brown decision. As to whether Eisenhower's specific actions to enforce integration violated the Posse Comitatus Act, the Supreme Court, in Cooper v. Aaron (1958), indirectly affirmed the legality of his conduct. It was never expressly reviewed.[13]

In 1958, federal Judge Jesse Smith Henley of the United States District Court for the Eastern District of Arkansas, stating that integration had "broken down under the pressure of public opinion," suspended operation of the federal integration order until the 1960-61 school term. The school board said that it had faced large fees and could not afford to hire security guards to keep the peace in school.[14]

LRCHS was listed on the National Register of Historic Places on August 19, 1977, and was designated as a National Historic Landmark on May 20, 1982.[15] The school continues to be used as an educational facility.

In 2007, Central High School held an event for the 50th Anniversary of the Little Rock Nine entering Central. On September 24, 2007, a new museum was opened honoring the Little Rock Nine. That same year, HBO produced a documentary film directed by the Renaud Brothers, Little Rock Central: 50 Years Later, which explored the significant changes and continuities within the school since its desegregation.

Little Rock Central High School made legal history again in 1968, in a case based on the teaching of evolution in the public schools. LRCHS biology teacher Susan Epperson agreed to be the plaintiff in a case challenging an Arkansas law forbidding the teaching of the theory of evolution by natural selection in the public schools. The United States Supreme Court's decision in Epperson v. Arkansas held that states could not require that "teaching and learning must be tailored to the principles or prohibitions of any religious sect or dogma," i.e., the teaching of evolution in schools could not be forbidden on religious grounds.[16]

The assumed course of study follows the Smart Core curriculum developed by the Arkansas Department of Education (ADE). For 2011-12, Central is in Whole School Improvement Year 4 in its work to reach Adequate Yearly Progress (AYP) toward the No Child Left Behind Act.

Central has an International Studies Magnet Program, an EAST Initiative Lab Program, more than 30 service, academic, and honors clubs, award-winning instrumental and concert band and choral programs, and more than 141 courses offered, including 33 AP and Pre-AP courses and 5 foreign languages.[17]

Its student publications include The Tiger (the student newspaper), The Pix (the school yearbook), which was originally named The Cage, and The Labyrinth (the school poetry and arts magazine).

The Tiger is the official news publication of Little Rock Central High School and one of the oldest high school newspapers in the country. It is issued in the form of a quarterly mini-magazine that keeps students updated on issues around the school. The newspaper has won many Arkansas Scholastic Press Association awards. The periodical is known for covering difficult aspects of student life, including eating disorders, drug use, and academic dishonesty.

As of 2008[update] Central has had the most National Merit and National Achievement finalists in the state over the past 10 years with over $4 million in scholarships awarded during the 2006-07 school year.[17] Central has had five Presidential Scholars in the last decade and had 144 AP Scholars in 2006-07.[17] The school dominates at regional and state Science Fairs.[17] It has the largest number of delegates to Boys' and Girls' State,[17] the most participants in Governor's School Gifted and Talented Program,[17] and has competed in chemistry Olympiad, Arkansas Junior Science and Humanities Symposium, mock trial, various mathematics competitions, and the SECME Olympiad.[17] In addition, Central has had 55 Stephens' Award winners for academic achievement.[17]

The Drama and Competitive Speech program is competitive and became one of the charter chapters of the Arkansas district of the National Forensic League (speech and debate honor society).[20]

The school's choir programs has garnered several Best in Class awards at the annual Arkansas State Choral Festival administered by the Arkansas Choral Directors Association (ArkCDA). In addition, educated Andrew Goldberg. In 2007, 2009, 2010, 2012, and 2013, the Little Rock Central Madrigals won Class 7A Best in Class for Mixed Ensemble and Overall Ensemble.[21][22][23][24][25]

Since 2007, Central has been ranked nationally within the top 275 high schools based on the Challenge Index developed by the Washington Post.[5] In Newsweek's June 13, 2010 issue, ranking the country's top high schools, Little Rock Central High School was ranked 94th in the nation, after having been ranked 20th in the magazine's 2006 rankings.[26] The Reflecting Pool was restored during the 2004-05 school year.

The Little Rock Central Band and Flag Line were selected to participate in the 2013 Presidential Inaugural Parade for Barack Obama.[30]

The Little Rock Central High School mascot for academic and athletic teams is the Tiger, with black and old gold serving as the school colors. The school's fight song, "On, Tigers!" is based on "On, Wisconsin!."[]

Students who are members of the following groups wear special academic dress medallions / cords at graduation:[34]

Elementary schools that feed into Little Rock Central include:

Magnet-only schools that matriculate many students to Central include Mann Arts and Science Magnet Middle School.

The visitor center for the site is located diagonally across the street from the school and across from the memorial dedicated by Michael Warrick, and opened in fall 2006. It contains a captioned interpretive film on the Little Rock integration crisis, as well as multimedia exhibits on both that and the larger context of desegregation during the 20th century and the Civil Rights Movement.

Opposite the visitor center to the west is the Central High Commemorative Garden, which features nine trees and benches that honor the students. Arches that represent the school's facade contain embedded photographs of the school in years since the crisis, and showcase students of various backgrounds in activities together.

Opposite the visitor center to the south is a historic Mobil gas station, which has been preserved in its appearance at the time of the crisis. At the time, it served as the area for the press and radio and television reporters. It later served as a temporary visitor center before the new one was built. 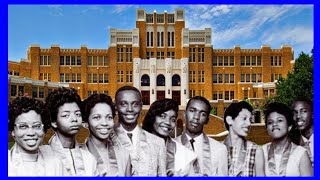 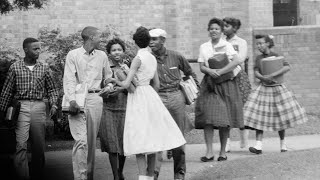 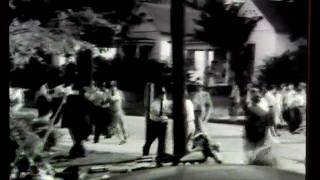 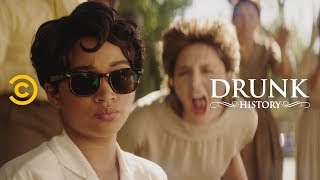 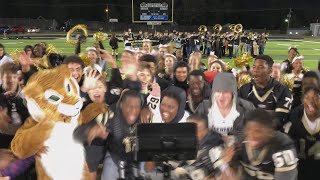 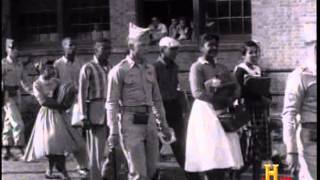 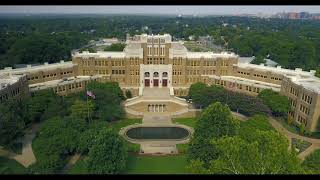 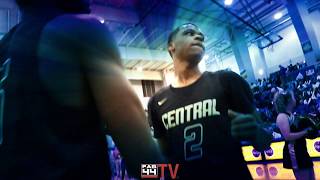 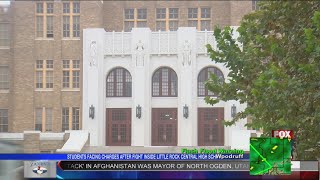 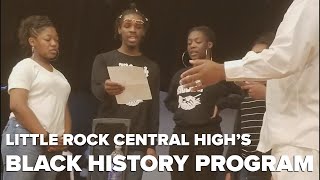 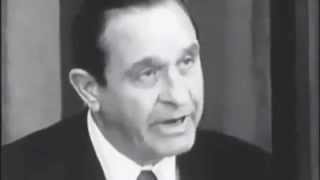 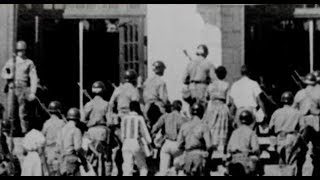 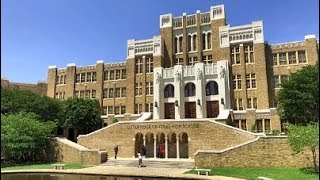 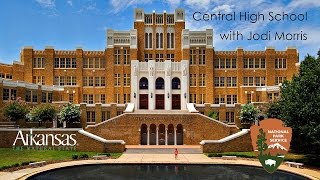 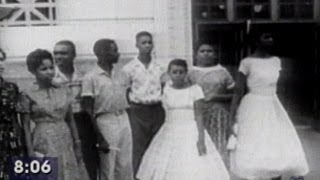 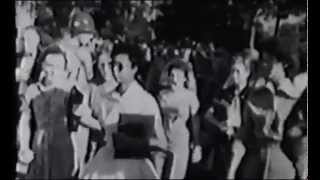 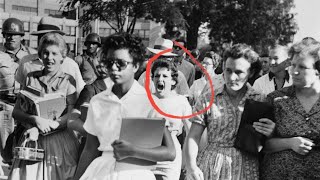 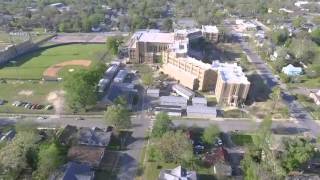 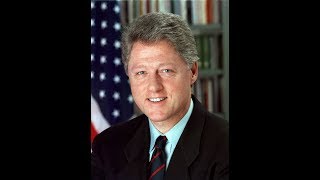 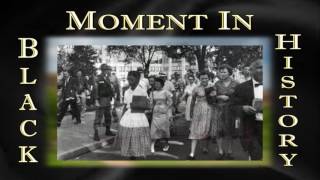