Ward Walrath Kimball (March 4, 1914 - July 8, 2002), born in Minneapolis, Minnesota, was an animator for the Walt Disney Studios. He was one of Walt Disney's team of animators, known as Disney's Nine Old Men. His films have been honored with two Academy Awards for Best Animated Short Film.

Outside of his job as an animator, Kimball was a railroad enthusiast as well as a talented jazz trombonist. He founded and led the seven-piece Dixieland band Firehouse Five Plus Two, in which he played trombone.

Kimball was born on March 4, 1914, in Minneapolis. His father was a salesman who traveled widely. He grew up in the Midwest, often residing with his grandparents.[1]

While Kimball was a brilliant draftsman, he preferred to work on comical characters rather than realistic human designs. Animating came easily to him and he was constantly looking to do things differently. Because of this, Walt Disney called Ward a genius in the book The Story of Walt Disney.[2] While there were many talented animators at Disney, Ward's efforts stand out as unique.

According to Jeff Lenburg's assessment of him, Kimball was a pioneer animator and a great innovator of his time. He served as one of Disney's Nine Old Men. He instilled life to diverse Disney characters, such as Mickey Mouse, Jiminy Cricket, the Cheshire Cat, the Mad Hatter, and Tweedledee and Tweedledum.[3]

Kimball attended the Santa Barbara School of the Arts in order to become a painter and illustrator. Kimball's instructor at the school suggested to him that his work should be submitted to Walt Disney Productions (later known as the Walt Disney Animation Studios), and that he should pursue a career in animation.[3] In March 1934, a 20-year-old Kimball applied for a job at the Disney studio. In April 1934, he was hired as an inbetweener. He was then promoted to an assistant animator. He served as an assistant to animator Hamilton Luske. Kimball worked primarily in the Silly Symphony series, where his film credits include the animated short films The Wise Little Hen (1934), The Goddess of Spring (1934), and The Tortoise and the Hare (1935). He also worked on the Mickey Mouse series, where his film credits include the short film Orphan's Benefit (1934).[3]

In 1936, Kimball was promoted to an animator in his own right. He continued to work in the Silly Symphony series. Some of his memorable credits in this position include the animated short films Toby Tortoise Returns (1936), More Kittens (1936), and Mother Goose Goes Hollywood (1938). His first solo effort as an animator was animating a grasshopper turned musician in Woodland Cafe; (1937).[3]

Kimball was included in the team of animators known later as Disney's Nine Old Men, whose original task was animating Snow White and the Seven Dwarfs (1937). The film was the first feature-length animated film by the Disney studio.[3] Kimball spent months working on the sequence animation for a scene where the Seven Dwarfs are eating soup, prepared for them by Snow White.[3] This scene, however, was ultimately left out, since it would have come after the sequence in which the dwarfs washed their hands.

Following the release of Snow White, Kimball was promoted to a supervising or directing animator. He would remain in this position until his retirement in the 1970s. His employer Walt Disney was sufficiently satisfied with Kimball's work that he entrusted him with designing new character Jiminy Cricket. The character was intended for use in the Disney studio's next feature film, Pinocchio. It took Kimball 12 or 14 drafts before completing his final design of Jiminy.[3] Kimball told one interviewer that he "hated" animating Jiminy Cricket: "I got sick of drawing that oval head looking in every direction."[4]) Kimball's next major task was designing the sympathetic Crows in Dumbo (1941). Following the example of the Seven Dwarfs from Snow White, Kimball had to give each crow a distinct appearance and character.[3]

Kimball supervised or directed the animation of several Disney animated feature films. Among them were Fantasia (1940), The Reluctant Dragon (1941), and The Three Caballeros (1944). The last film mentioned featured the trio of Donald Duck, Jose; Carioca, and Panchito Pistoles.[3] According to animation historian Jeff Lenburg, The Three Caballeros is considered to have a place among the finest work of Kimball's career.[5] The film was reportedly successful in the American box office, earning about 3 to 4 million dollars.[3]

Kimball directed the character animation and sequences of the Pecos Bill segment in Melody Time (1948).[3] He also worked as a senior animator for The Adventures of Ichabod and Mr. Toad (1949). In Cinderella (1950), Kimball was responsible for the characters Jaq and Gus and Lucifer the Cat.[3] In Alice in Wonderland (1951), Kimball was responsible for Tweedledee and Tweedledum, the Walrus and the Carpenter, the Hatter and his mad tea party, and the Cheshire Cat.[3] His other film credits include the feature films Peter Pan (1953), Mary Poppins (1964), and Bedknobs and Broomsticks (1971).[3]

Kimball served as a screenwriter for the featurette Eyes In Outer Space (1959). The film combined live action and animation. It depicted weather satellites and explained how the weather is predicted. The film was originally theatrically released. Around 1962, it started being shown in Disneyland.[3]

During the 1950s, the Disney studio shifted its focus from theatrical animation to television. Kimball wrote and directed three hour-long television shows about space exploration. They were Man in Space (1955), Man and the Moon (1955), and Mars and Beyond (1957). The consultants for these shows included pioneers of the Space Age, such as aerospace engineer Wernher von Braun. According to animation historian Jeff Lenburg, the three shows helped in sparking popular interest in spaceflight.[3] Kimball was also responsible for the science-fiction two-reel cartoon Cosmic Capers (1957).[3]

According to Jeff Lenburg, Kimball retired in 1973 and left the Disney studio. He continued, however, to serve as a consultant on special assignments. He worked on the World of Motion attraction for Disney's EPCOT Center.[3]

Kimball was also a jazz trombonist. He founded and led the seven-piece Dixieland band Firehouse Five Plus Two, in which he played trombone. The band made at least 13 LP records and toured clubs, college campuses and jazz festivals from the 1940s to early 1970s. Kimball once said that Walt Disney permitted the second career as long as it did not interfere with his animation work. Kimball appeared on the March 17, 1954, episode of You Bet Your Life, where Groucho Marx coaxed him into playing his trombone with the house band. He and his partner won $75 in their quiz portion of the show, including one Disney animation question that Kimball answered easily.

Kimball continued to work at Disney until 1974, working on the Disney anthology television series, being one of the writers for Babes in Toyland, creating animation for Mary Poppins, directing the animation for Bedknobs and Broomsticks, and working on titles for feature films such as The Adventures Of Bullwhip Griffin and Million Dollar Duck. His last staff work for Disney was producing and directing the Disney TV show The Mouse Factory, which ran from 1972 to 1974. He continued to do various projects on his own, even returning to do some publicity tours for the Disney corporation. He also worked on the World of Motion attraction for Disney's EPCOT Center.

Kimball also produced two editions of a volume titled Art Afterpieces,[8] in which he revised various well-known works of art, such as putting Mona Lisa's hair up in curlers, showing Whistler's Mother watching TV, and adding a Communist flag and Russian boots to Pinkie. These masterpiece remixes are thought to have been appropriated by the street artist Banksy.[9]

While his only two acting appearances on film were an uncredited role as a jazz musician (with his Firehouse Five Plus Two) in Hit Parade of 1951 and as an IRS Chief in Mike Jittlov's The Wizard of Speed and Time, Kimball served as host of the "Man in Space" and "Man and the Moon" episodes of Disneyland in 1955 and 1956 respectively. He hosted the second season of the 1992 PBS series Tracks Ahead. That season has since been repackaged to feature current host Spencer Christian.

As recounted in Neal Gabler's biography of Walt Disney,[10] Ward Kimball was a key figure in spreading the urban legend that Disney had left instructions for his body to be preserved by cryonics after his death.

Amid Amidi wrote a biography of Kimball, Full Steam Ahead: The Life and Art of Ward Kimball that was projected for publication in the fall of 2012.[11] However, publication of the biography was canceled in February 2013, which Amidi believed was due to pressure from the Disney corporation.[12]

Note: At the time these films were produced it was common for one animator to animate every single character in the shot. The Ward Kimball locomotive pulls into New Orleans Square Station in Disneyland
I hope I can hold out for the big one, the great earthquake. Then when California slips into the Pacific Ocean, then me and all my trains can fall into the great abyss and into oblivion.

Along with his employer and friend Walt Disney, and friend Ollie Johnston, Kimball collected old railroad ephemera. He was also an avid collector of model trains.[14]

Kimball was an avid railway enthusiast and donated his narrow gauge collection to the Orange Empire Railway Museum (OERM) in Perris, California. A full-size steam locomotive, which Kimball ran on his private 3-acre (12,000 m2) backyard railroad known as Grizzly Flats Railroad in San Gabriel, California, bears some of his original artwork on the headlamp and cab, and is on permanent display at the museum.[15][16] Kimball's roundhouse also included two small steam engines that had been used on sugar cane plantations, one of which was his and the other was owned by his friend, noted railroad historian Gerald M. Best.[17] In recognition to his love of railroading and support of the Orange Empire Railway Museum, the Perris Transit Center, where OERM historic trains travel, is dedicated to Mr. Kimball. In a rare deviation from its usually tight copyright policy, the Disney corporation allowed the city to decorate the transit center with Kimball's artwork. The center is currently served by Riverside Transit Agency buses, with train service as part of the Metrolink Perris Valley Line.[18]

In addition, Kimball also designed the logo for the Wildcat Railroad in Los Gatos, CA, owned by Billy Jones, a friend of Walt Disney who was an engineer for the Disneyland Railroad during its first week of operation.[19]

Kimball's talents are also evident in the reproduction steam locomotives built for the National Park Service at the Golden Spike National Historic Site at Promontory, Utah. Kimball helped match colors with an engine at the Smithsonian Institution and painted the artwork for the replicas of the Union Pacific No. 119 and Central Pacific Jupiter built by O'Connor Engineering Laboratories for the Park Service.[20]

Kimball died in 2002 in Los Angeles, California of complications from pneumonia at age 88. In 2005 the Disneyland Railroad named its newly acquired locomotive No. 5 "Ward Kimball" in his memory.[23][24][25] 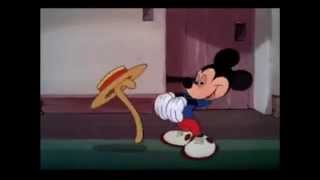 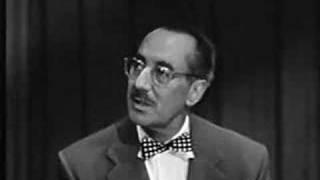 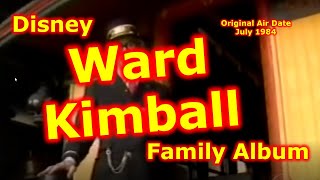 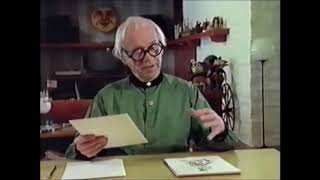 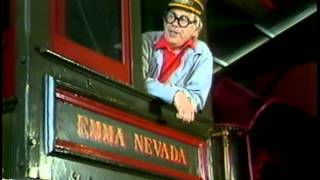 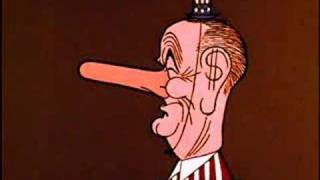 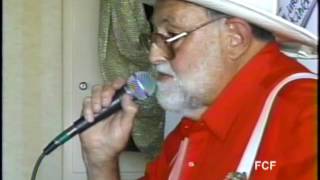 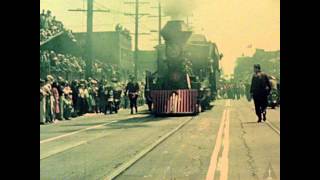 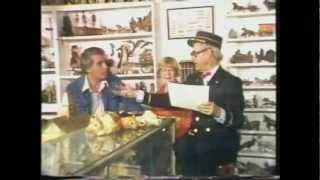 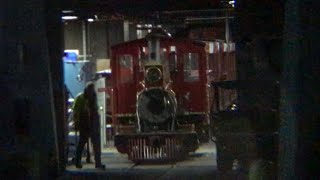 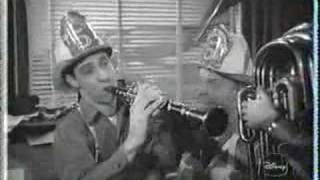 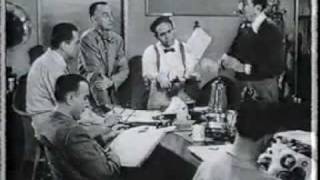 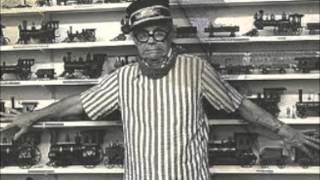 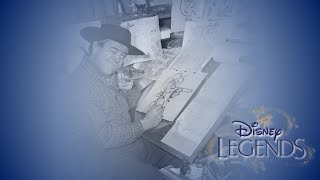 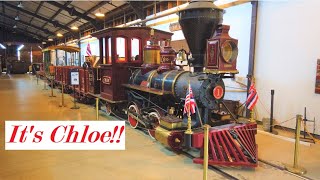 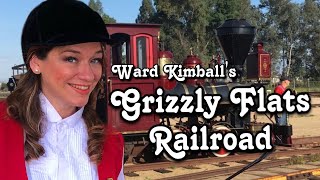 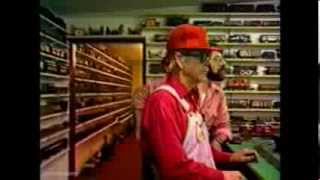