Listed below are the Major League Baseball teams with the worst season won-lost records, as determined by win percentage (.300 or less), minimum 120 games played.

The following teams finished the season with a .300 winning percentage or lower.

The 1899 Cleveland Spiders own the worst single-season record of all time (minimum 120 games) and for all eras, finishing at 20-134 (.130 percentage) in the final year of the National League's 12-team era in the 1890s; for comparison, this projects to 21-141 under the current 162-game schedule, and Pythagorean expectation based on the Spiders' results and the current 162-game schedule predicts a record of 24-138.

The Spiders had reasonable success in the 1890s, with seven straight winning seasons from 1892 to 1898 and a Temple Cup victory in 1895, while the once four-time American Association champion St. Louis Browns had fallen to 29-102 in 1897 (11-61 on the road) and to 39-111 (19-67 on the road) in 1898. The Spiders ownership, the Robison brothers, bought the Browns in time for the 1899 season, creating a conflict-of-interest situation which was later outlawed, and on the eve of the season, traded almost all of Cleveland's star players to St. Louis for very little in return, with respectable results for St. Louis - and disastrous results for Cleveland.

The 1899 Spiders set the major league record for most consecutive losses in a season (24, from July 26 to September 16), and had six losing streaks of 10 games or more. The Spiders lost 40 of their last 41 games, finishing 84 games behind the 1899 National League champion Brooklyn Superbas and 35 games behind the second-last-placed Washington Senators. They also lost 27 games in September, a record for the most games lost in a month until the 1909 Washington Senators went 5-29 in July.

Due to paltry attendances, the Spiders played 112 games on the road, finishing with a road record of 11-101 (the 101 road losses is a record which is unbreakable under the current MLB scheduling rules, which allow a maximum of 81 road games).

The 1899 Browns, renamed the "Perfectos" and staffed with all the best players from the 1898 Spiders (six of the Spiders' eight starting position players, and four starting pitchers, including the great Cy Young) improved by 44½ games, from 39-111 to 84-67. However, all St. Louis ultimately did was trade places with Cleveland in the standings. The Browns/Perfectos were renamed the St. Louis Cardinals in 1900, and are unrelated to the American League St. Louis Browns that adopted the discarded nickname and also appear on this list.

After the 1899 season, the National League contracted from twelve to eight clubs for the 1900 season, with the Spiders, the original Baltimore Orioles, Louisville Colonels (Louisville has not had another major league team since), and the original Washington Senators folding operations. Baltimore had also been stripped of its best players by Brooklyn in 1899, to somewhat less dramatic effect, but still enough to speed their demise.

The downsized 1900 National League allowed the Western League to fulfill its dreams of becoming a major league, filling the void in a number of cities by renaming itself the American League in 1900, and declaring itself a major league in 1901.

With shorter schedules before 1886, it was much more common for teams to finish with sub-.300 winning percentages, as there was less of the evening-out effect of a longer season, and some seasons had a number of teams, with nine in 1884 alone (between the three leagues that year).

In the list below (minimum 15 games played), four teams finished with worse overall winning percentages than the 1899 Spiders, but these teams played in leagues whose status as "major" is questionable: three of these occurred in the National Association (the status of the National Association as a major league has long been disputed), and the other occurred in the Union Association (conventionally listed as a major league, but this status has been questioned due to the league's overall lack of playing talent and poor organizational structure).

The 1889 Colonels finished 9-65 on the road, and their .122 road winning percentage is the third lowest in MLB history for a minimum of 60 games.

The 1890 Alleghenys were gutted before the season when nearly all of their best players defected to the Pittsburgh Burghers of the Players' League. Poor attendances meant that they played 97 of their 136 games on the road, finishing with a road record of 9-88: the 88 road losses remained a record until 1899, and is unreachable under current MLB scheduling rules, with the Alleghenys' .093 road winning percentage being the lowest in MLB history for a minimum of 60 games.

The Philadelphia Athletics were a dominant team in the early 1910s, winning American League pennants in 1913 and 1914 and the World Series in 1913. However, owner-manager Connie Mack felt that he was unable to pay his star players' salaries while the Federal League was in operation, and he sold or traded most of them after the 1914 World Series, in which the A's were upset by the Boston Braves in a 4-game sweep. The Athletics then finished in last place from 1915-1922. In 1916, they went 36-117, including 13-64 on the road. The 1916 Athletics' .235 winning percentage is the sixth-lowest of any MLB team and the lowest since 1900, along with their .170 road winning percentage.

The 1935 Boston Braves featured Hall of Famers Rabbit Maranville (age 43) and Babe Ruth (age 40). Braves owner Emil Fuchs had promised Ruth an ownership stake in the Braves and a chance to manage the club in the near future but had little intention of delivering either. Ruth retired on June 1, 1935, having hit .181 in 72 at-bats for the Braves, with six home runs (the last three all coming on the same day, May 25, 1935, at Pittsburgh). Fuchs, who had been plagued by financial problems for a decade, was forced to give up control of the Braves before the end of the season. The Braves' home winning percentage of .167 is the fifth-lowest of any MLB team and the lowest since 1900.

The 1962 New York Mets were an expansion team created to fill the void after the New York Giants and Brooklyn Dodgers left New York City at the end of the 1957 season. The Mets, filled with castoffs like "Marvelous" Marv Throneberry as well as aging Hall of Famer Richie Ashburn and low-talent rookies such as Choo-Choo Coleman, finished 40-120, the third-worst winning percentage in the modern era (.250) and the modern-era record for most losses. The Mets went on to finish last or next-to-last for seven years in a row before they shocked the baseball world by winning the 1969 World Series.

The 2003 Tigers seemed like a sure bet to break the 1962 Mets' modern record for most losses when they stood at 38-118 after 156 games, but they won five of their last six to avoid ignominy. On September 27, in their penultimate game, the Tigers came back from an 8-0 deficit to beat the Minnesota Twins 9-8 (the Twins, having just clinched the division, were resting their starters for the playoffs).[2] When the Tigers won the season finale to avoid tying the record, they received a standing ovation from the crowd. Mike Maroth, a starting pitcher for that Tigers team, went 9-21 and became the first pitcher to lose 20 games in a season since Brian Kingman dropped 20 games for the 1980 Oakland Athletics.[3] Ramón Santiago became only the 12th Triple Crown loser (a player who finishes last in all of the three Triple Crown categories) in modern MLB history.[4] One baseball statistician described the Tigers as possibly "the worst team of all time without a good excuse", as virtually every other team on the list had been reduced to minor-league status, plagued by financial problems, or was a first-year expansion team.[5]

The 2018 Orioles were the first team since the 2003 Tigers to win fewer than 50 games, and lost every season series against American League opponents; they only won two season series overall, both in interleague play, and finished 61 games behind the eventual AL East and World Series champion Boston Red Sox, further back from the lead than any team since World War II.

The 2020 Pittsburgh Pirates' 19-41 record for the shortened 2020 season owns the title for the "fewest wins in a regular season." 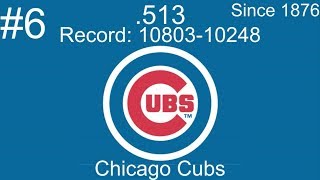 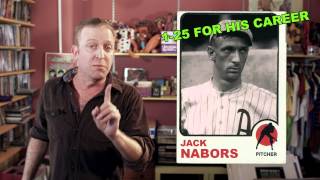 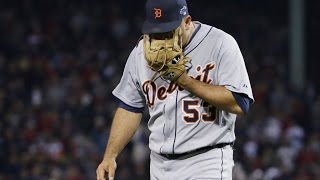 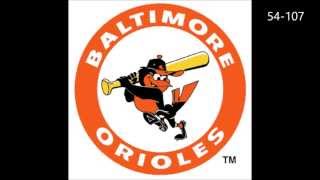 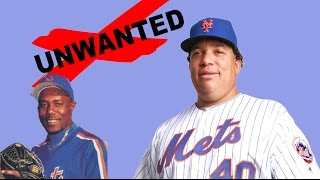 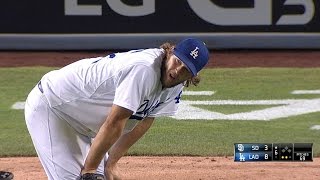 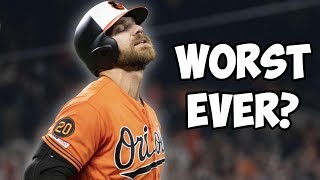 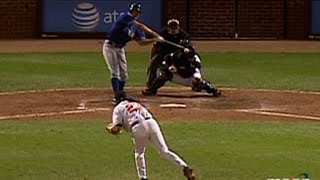 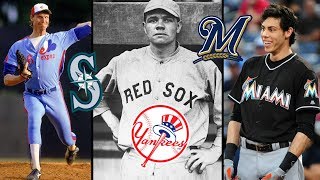 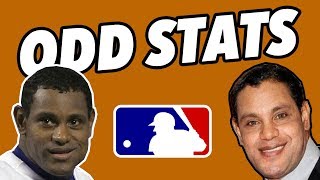 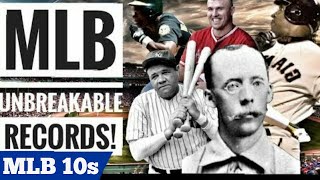 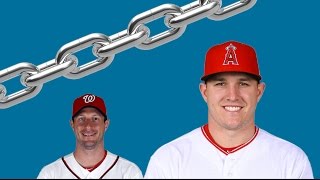 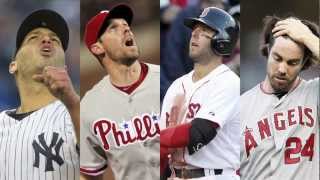 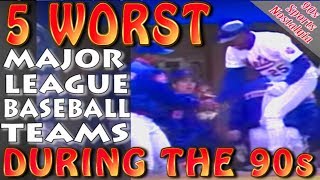 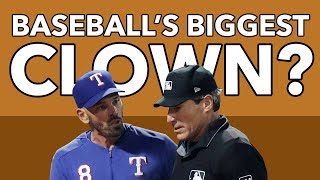 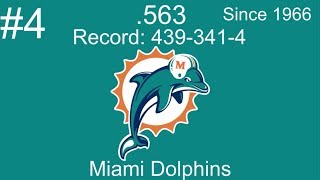 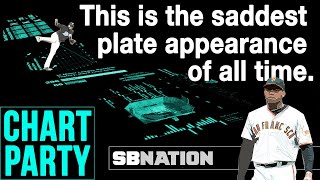 The pitcher who was a drunk, a killer, and an MLB record holder for most home runs given up
Watch   Add to List   Share 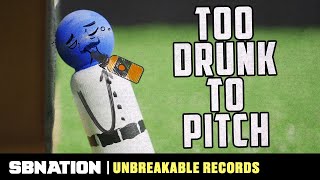