The Tsiolkovsky rocket equation, classical rocket equation, or ideal rocket equation is a mathematical equation that describes the motion of vehicles that follow the basic principle of a rocket: a device that can apply acceleration to itself using thrust by expelling part of its mass with high velocity can thereby move due to the conservation of momentum.

is delta-v - the maximum change of velocity of the vehicle (with no external forces acting).

is the initial total mass, including propellant, a.k.a. wet mass.

is the final total mass without propellant, a.k.a. dry mass.

is the effective exhaust velocity, where:

is the specific impulse in dimension of time.

is the natural logarithm function.

The equation is named after Russian scientist Konstantin Tsiolkovsky (Russian: ? ) who independently derived it and published it in his 1903 work.[1][2]

The equation had been derived earlier by the British mathematician William Moore in 1810,[3] and later published in a separate book in 1813.[4] The minister William Leitch, who was a capable scientist, also independently derived the fundamentals of rocketry in 1861.

While the derivation of the rocket equation is a straightforward calculus exercise, Tsiolkovsky is honored as being the first to apply it to the question of whether rockets could achieve speeds necessary for space travel.

In the following derivation, "the rocket" is taken to mean "the rocket and all of its unburned propellant".

) to the change in linear momentum of the whole system (including rocket and exhaust) as follows:

is the momentum of the rocket at time

is the momentum of the rocket and exhausted mass at time

and where, with respect to the observer:

The velocity of the exhaust

by (since exhaust velocity is in the negative direction)

, since ejecting a positive

results in a decrease in mass,

If there are no external forces then

(conservation of linear momentum) and

is constant, this may be integrated as follows:

is the initial total mass including propellant,

the final mass, and

the velocity of the rocket exhaust with respect to the rocket (the specific impulse, or, if measured in time, that multiplied by gravity-on-Earth acceleration).

is the total working mass of propellant expended.

The equation can also be derived from the basic integral of acceleration in the form of force (thrust) over mass. By representing the delta-v equation as the following:

where T is thrust,

is the initial (wet) mass and

is the initial mass minus the final (dry) mass,

and realising that the integral of a resultant force over time is total impulse, assuming thrust is the only force involved,

The integral is found to be:

Realising that impulse over the change in mass is equivalent to force over propellant mass flow rate (p), which is itself equivalent to exhaust velocity,

the integral can be equated to

Imagine a rocket at rest in space with no forces exerted on it (Newton's First Law of Motion). From the moment its engine is started (clock set to 0) the rocket expels gas mass at a constant mass flow rate R (kg/s) and at exhaust velocity relative to the rocket ve (m/s). This creates a constant force F propelling the rocket that is equal to R × ve. The rocket is subject to a constant force, but its total mass is decreasing steadily because it is expelling gas. According to Newton's Second Law of Motion, its acceleration at any time t is its propelling force F divided by its current mass m:

Now, the mass of fuel the rocket initially has on board is equal to m0 - mf. For the constant mass flow rate R it will therefore take a time T = (m0 - mf)/R to burn all this fuel. Integrating both sides of the equation with respect to time from 0 to T (and noting that R = dm/dt allows a substitution on the right), we obtain

, with an effective exhaust speed

In the rocket's center-of-mass frame, if a pellet of mass

is ejected at speed

and the remaining mass of the rocket is

, the amount of energy converted to increase the rocket's and pellet's kinetic energy is

Using momentum conservation in the rocket's frame just prior to ejection,

, from which we find

be the initial fuel mass fraction on board and

the initial fueled-up mass of the rocket. Divide the total mass of fuel

discrete pellets each of mass

. The remaining mass of the rocket after ejecting

. The overall speed change after ejecting

Notice that for large

the last term in the denominator

and can be neglected to give

, since the remaining mass of the rocket is

If special relativity is taken into account, the following equation can be derived for a relativistic rocket,[6] with

standing for the speed of light in a vacuum:

allows this equation to be rearranged as

Then, using the identity

(here "exp" denotes the exponential function; see also Natural logarithm as well as the "power" identity at Logarithmic identities) and the identity

(see Hyperbolic function), this is equivalent to

Delta-v (literally "change in velocity"), symbolised as ?v and pronounced delta-vee, as used in spacecraft flight dynamics, is a measure of the impulse that is needed to perform a maneuver such as launching from, or landing on a planet or moon, or an in-space orbital maneuver. It is a scalar that has the units of speed. As used in this context, it is not the same as the physical change in velocity of the vehicle.

Delta-v is produced by reaction engines, such as rocket engines and is proportional to the thrust per unit mass, and burn time, and is used to determine the mass of propellant required for the given manoeuvre through the rocket equation.

For interplanetary missions delta-v is often plotted on a porkchop plot which displays the required mission delta-v as a function of launch date.

The effective exhaust velocity is often specified as a specific impulse and they are related to each other by:

is the specific impulse in seconds,

The rocket equation captures the essentials of rocket flight physics in a single short equation. It also holds true for rocket-like reaction vehicles whenever the effective exhaust velocity is constant, and can be summed or integrated when the effective exhaust velocity varies. The rocket equation only accounts for the reaction force from the rocket engine; it does not include other forces that may act on a rocket, such as aerodynamic or gravitational forces. As such, when using it to calculate the propellant requirement for launch from (or powered descent to) a planet with an atmosphere, the effects of these forces must be included in the delta-V requirement (see Examples below). In what has been called "the tyranny of the rocket equation", there is a limit to the amount of payload that the rocket can carry, as higher amounts of propellant increment the overall weight, and thus also increase the fuel consumption.[7] The equation does not apply to non-rocket systems such as aerobraking, gun launches, space elevators, launch loops, tether propulsion or light sails.

The rocket equation can be applied to orbital maneuvers in order to determine how much propellant is needed to change to a particular new orbit, or to find the new orbit as the result of a particular propellant burn. When applying to orbital maneuvers, one assumes an impulsive maneuver, in which the propellant is discharged and delta-v applied instantaneously. This assumption is relatively accurate for short-duration burns such as for mid-course corrections and orbital insertion maneuvers. As the burn duration increases, the result is less accurate due to the effect of gravity on the vehicle over the duration of the maneuver. For low-thrust, long duration propulsion, such as electric propulsion, more complicated analysis based on the propagation of the spacecraft's state vector and the integration of thrust are used to predict orbital motion.

to overcome gravity and aerodynamic drag).

With three similar, subsequently smaller stages with the same

for each stage, we have

If the motor of a new stage is ignited before the previous stage has been discarded and the simultaneously working motors have a different specific impulse (as is often the case with solid rocket boosters and a liquid-fuel stage), the situation is more complicated.

When viewed as a variable-mass system, a rocket cannot be directly analyzed with Newton's second law of motion because the law is valid for constant-mass systems only.[8][9][10] It can cause confusion that the Tsiolkovsky rocket equation looks similar to the relativistic force equation

. Using this formula with

as the varying mass of the rocket seems to derive the Tsiolkovsky rocket equation, but this derivation is not correct. Notice that the effective exhaust velocity

does not even appear in this formula. 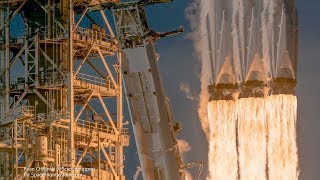 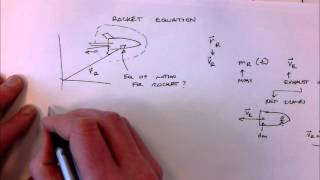 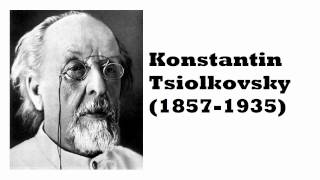 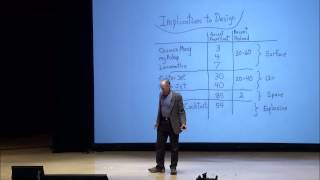 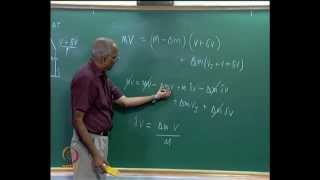 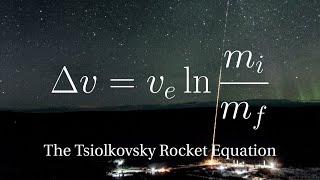 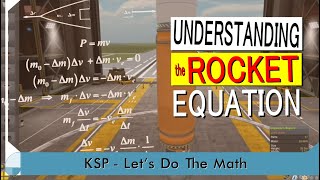 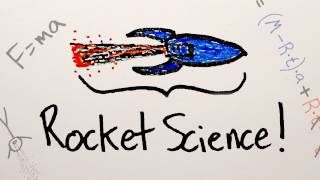 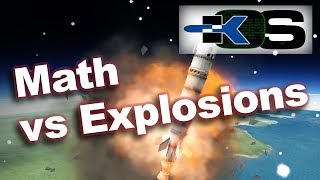 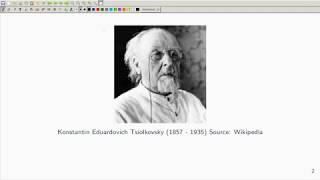 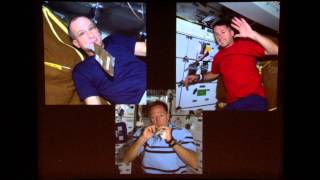 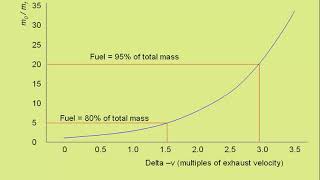 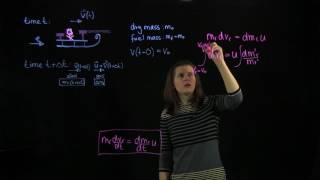 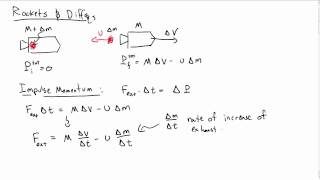 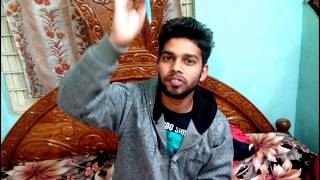 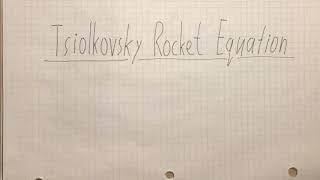 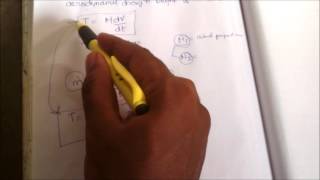 Tsiolkovsky solves the problem of traveling to space, with ROCKET (how rocket work)
Watch   Add to List   Share 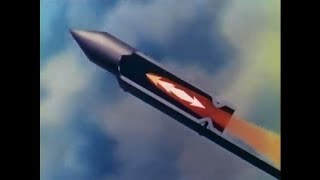 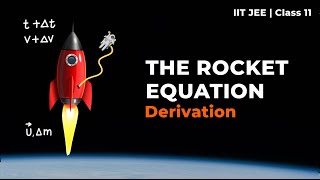