"Vertigo" is a song by Irish rock band U2. It is the opening track on their eleventh studio album, How to Dismantle an Atomic Bomb (2004). It was released to radio as the album's lead single on 24 September 2004, and upon release, it received extensive airplay. The song was an international success, bolstered by its usage in a television advertisement featuring the band for Apple's iPod digital music player. The song lent its name to the band's 2005-2006 Vertigo Tour.

In the United States, "Vertigo" peaked at number 31 on the Billboard Hot 100 and number one on the Alternative Songs chart. It topped the singles charts in Denmark, Greece, Ireland, Italy, Spain and the United Kingdom while reaching the top 10 in Australia, Austria, Belgium (Wallonia), Canada, Finland, the Netherlands, New Zealand, Norway, Sweden and Switzerland. "Vertigo" won three Grammy Awards for Best Rock Performance by a Duo or Group with Vocal, Best Rock Song, and Best Short Form Music Video at the 47th Annual Grammy Awards ceremony in 2005.[1]

"Vertigo" originated from a demo that guitarist the Edge composed at his home in Malibu on a "very simple Pro-Tools rig". Playing along to drum loops that drummer Larry Mullen Jr. had recorded for him, the Edge created the guitar riff among others while "exploring rock 'n' roll guitar" and "what that means in the twenty-first century".[3] Inspiration for the riff came within 20 minutes of the Edge first plugging into a 1957 Fender Deluxe amplifier, which was acquired for him by his technician Dallas Schoo after he requested a small amplifier he could use to record demos at his home studio.[4] The Edge gave the demo a working title of "Full Metal Jacket".[5] When lead singer Bono heard it, he was very enthused, describing it as: "the mother of all rock 'n' roll tunes. I don't know where it came from but it's a remarkable guitar thing. You want to hear it - it's a reason to make a record. The song is that good!"[6] Believing that their pending record would have a punk rock energy and be very collaborative between the band members, U2 hired Chris Thomas to produce it; the Edge said that he worked well with bands and had produced several records that were favourites among U2, including early Roxy Music albums and the Sex Pistols's Never Mind the Bollocks, Here's the Sex Pistols.[3] U2 began working with Thomas on the album How to Dismantle an Atomic Bomb in February 2003.[7] During the sessions, U2 experimented with different melodies and rhythm ideas for "Full Metal Jacket".[3] Bono's original set of lyrics was inspired by Leonard Peltier, a Native American rights activist who was controversially convicted of killing two Federal Bureau of Investigation agents.[5] Bono did not believe Peltier deserved to be imprisoned, and he took a "new-journalism approach" to writing the lyrics.[8] The song was subsequently retitled "Native Son",[5] and after extensive experimentation on it, the band recorded and mixed a version of the song to completion with Thomas.[3] The group were so excited by the song, they sent it to Interscope Records, which was equally excited by it. However, Bono called the decision a mistake and said the song ultimately "wasn't as good as [they] thought".[8]

After working for nine months with Thomas, U2 had recorded an album's worth of material, but they were dissatisfied with the quality of it and decided to delay the release. As a result, they hired producer Steve Lillywhite to replace Thomas in January 2004. Lillywhite urged the band to record in the larger space at Hanover Quay Studio to encourage better performances. While Bono was away for the week, the band re-recorded the backing track for "Native Son".[3] When Bono returned, Lillywhite asked him to record a guide vocal, but 30 seconds into a take, Bono stopped, as he became uncomfortable with the thought of singing the lyrics to a large crowd in a live setting.[5] He said: "The lyrics were about something I care deeply about, but the song didn't vibrate. It didn't change the room temperature."[7] The song subsequently was deconstructed and the lyrics were changed around, with various iterations of the song being called "Shark Soup" and "Viva la Ramone". At one point, Bono wrote a completely new set of lyrics in Spanish, remnants of which would survive in the completed version of the song. Eventually, the song transformed into "Vertigo", but the group were still considering several possible variations of the chorus. At the suggestion of some outsiders, the band chose the "Hello, hello" version. Lillywhite also double tracked Bono's vocals in the chorus to give them more impact.[5] The Edge said the vocal melody in the final version of the song differed from his original demo, but that otherwise most of the musical ideas from the demo were present in the completed song.[3]

The Edge achieved the guitar tones on the song using four pieces of equipment: a 1966 Fender Telecaster guitar, a Line 6 DM4 Distortion Modeler effects pedal, a Korg SDD-3000 digital delay pedal, and the Fender Deluxe amplifier. The distortion pedal is used for the raw sound of the main power chord riff, while the delay pedal is used for the clean, ambient accent notes in the song's instrumental break.[4]

At the beginning of the song, Bono counts off in Spanish "Unos, dos, tres, catorce!"[9] In English, this translates to "some, two, three, fourteen!"[10] When asked about this oddity in an interview for Rolling Stone, Bono replied "there may have been some alcohol involved".[8] Some sources have suggested that as the first words spoken on the album, the lyrical choice was a deliberate nod to Exodus 3:14 (the first Testament (Old) of the Christian Bible, second book, third chapter, fourteenth verse), whereby after Moses asks God's name, God responds "I Am that I Am". This theory is supported by the fact the final track on the How to Dismantle an Atomic Bomb album is titled "Yahweh", another name for the Abrahamic god.[11] The count off was parodied by novelty singer Richard Cheese on his version of U2's "Sunday Bloody Sunday" on his 2005 album Aperitif for Destruction.

A Spanish reply of "¡Hola!" is also heard behind the "Hello, hello" of the refrain, as well as "¿Dónde está?" ("Where is it?" or "Where are you?" depending upon if this is intended as a question to the location of Vertigo or Bono himself) after the line "I'm at a place called Vertigo". The "Hello, hello" line itself is reminiscent of similar lyrics in the song "Stories for Boys" from U2's debut album Boy; in Vertigo Tour concerts, the band frequently included a section of the latter song in their performances of "Vertigo." These concerts have also sometimes featured "Vertigo" played twice, once early in the show and again as a final encore; this also looks back to U2's early days, when they did not have enough songs to fill out an entire performance and had to repeat some at the end.

U2 performed "Vertigo" in a television commercial for the Apple iPod as part of a cross-marketing plan to promote both the album and Apple's music products (especially the U2 Special Edition iPod and the iTunes Music Store's exclusive digital box set for U2, The Complete U2).[12]

Use in the media

In the United Kingdom, the song moved from BBC Radio 1's B-list in the first week of its airplay release to the A-list in the second week. The song was released commercially on 15 November, and debuted at number one on the UK Singles Chart, and remained there for one week. In total, it spent nine weeks in the top 40.

In Australia, the track debuted at number five on the ARIA Charts, and was ranked number 38 on Triple J's Hottest 100 of 2004. In the Netherlands, "Vertigo" reached number two on the Mega Top 100.

The digital single holds a Gold status in the United States.

The video for the song features U2 performing in a featureless desert as black jet streams emit from behind each band member; on the ground is a huge white bulls-eye symbol used as a motif for the album graphics. The circular platform that the band performs on constantly elevates up and down in a spiral pattern, as the wind blows in the band's face. It was directed by the team of Alex & Martin. It was recorded in Punta Del Fangar (Ebro Delta) in Spain, and won Grammy Awards for Best Short Form Music Video in 2005.

Nathaniel Willemse released a cover version of Vertigo as his debut single in 2008, after having performed it on Australian Idol series four in 2006.[17]

Bon Jovi performed a snippet of the song during Bad Medicine on their 2011 Live 2011.[] 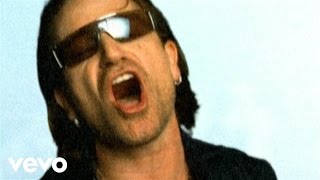 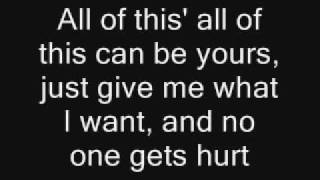 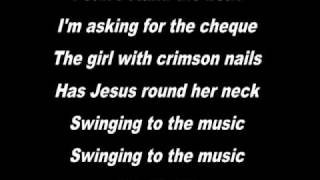 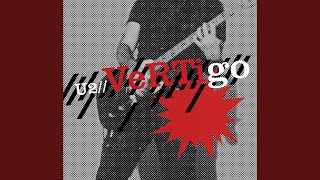 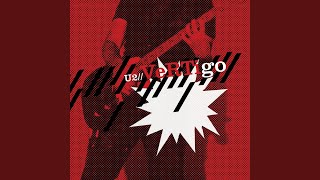 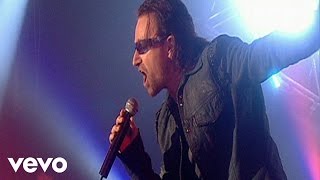 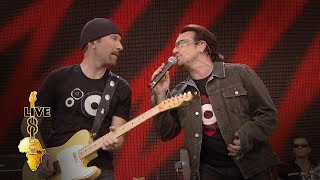 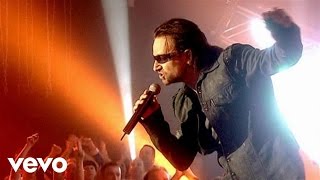 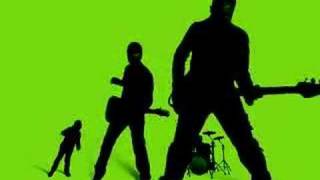 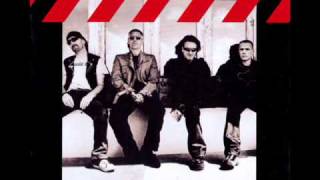 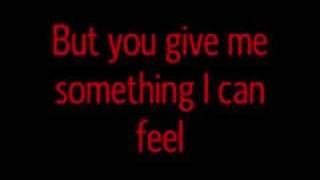 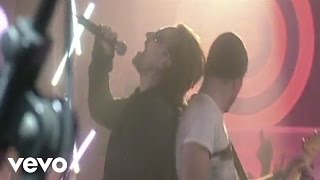 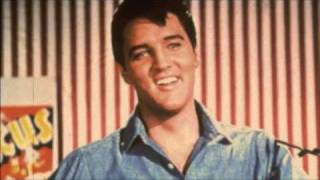 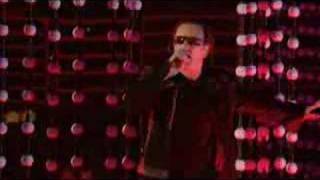 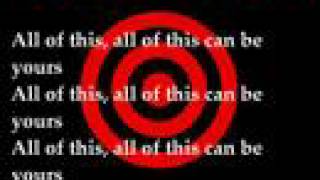 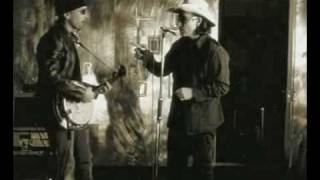 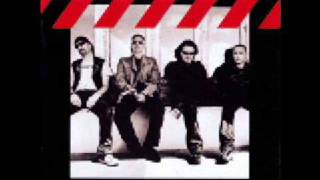 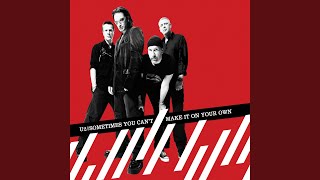 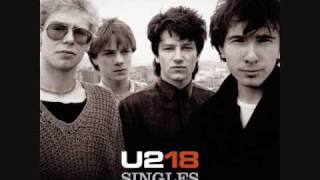